Via Bretibart TV:
A First! Snow Falls in Baghdad

BAGHDAD (AP) – After weathering nearly five years of war, Baghdad residents thought they’d pretty much seen it all. But Friday morning, as muezzins were calling the faithful to prayer, the people here awoke to something certifiably new. For the first time in memory, snow fell across Baghdad.
…
For a couple of hours anyway, a city where mortar shells routinely zoom across to the Green Zone became united as one big White Zone. As of late afternoon, there were no reports of violence. The snow showed no favoritism as it fell faintly on neighborhoods Shiite and Sunni alike, and (with apologies to James Joyce) upon all the living and the dead.

The snow came as the Iraqi parliament passed the De-Baathification Reform law which will allow Sunnis to once again enter government jobs. This is a huge step towards reconciliation.

“A few minutes ago, I was covered with snowflakes. In my hair, on my shoulders. I invite all the people to enjoy peace, because the snow means peace.”

Murtadha Fadhil, who works for the traffic police, huddled under a balcony to keep dry, and declared the snow “a new sign of the new Iraq”.

He said the phenomenon was a sign of hope and purity. “We hope Iraqis will purify their hearts and politicians will work for the prosperity of all Iraqis,” he said.

* With apologies to Carlos. 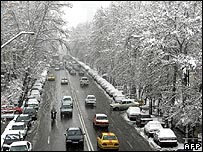 In other cold news,
Dozens killed in Iran blizzards.