Via Gerard, the Potatohead caucus is causing quite a stir in political circles:
The Washignton Post took notice, As the Iowa Caucuses Near, This Guy Is A Hot Potato, and so did others: Mr. Potato Head Photos ‘Capture Personalities’ Of Presidential Candidates, complete with slideshow.

Don Surber‘s also blogging about it, too. 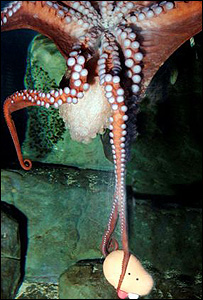 But the Potatoheads are becoming more prominent in other areas:
Some have quietly left their mark in the art world: A Very Brief History of Art, Featuring Mr. Potato Head

Others have ventured where no Potatohead had gone before, Mr Potato Head makes octopus pal, which Blue Crab Boulevard marks as a tragedy.

Like any large clan, the Potatoheads have their black sheep, too: One got busted in Australia

Upon opening the parcel, the officers were greeted with the smiling face of the popular children’s toy, which features a potato-like head and removable facial features. But when they removed a panel from the back of the toy, the officers found 10.34 ounces of ecstasy in a plastic bag.

Blue Crab Boulevard remembers the days (before my time) when you had to use a real potato for Mr. Potatohead.

Recently they had their distant cousin Paul come visit from Japan, where he’s a famous Sumo wrestler:

Say what you may of the octopus-spud love affair, at least he’s not a green penis that sings and dances.


I recently received an email asking why I feature the WSJ’s 5 Best instead of NYT bestsellers. The reason is that the WSJ selections consistently have very good books that I find interesting, unlike a lot of the NYT bestsellers.