As regular readers of this blog know, I have been posting about female genital mutilation (FGM) for a long time. My position is as follows:

I do not care whether this is a tribal, religious, and/or cultural tradition at all, the practice of female genital mutilation is a barbaric custom that must be stopped.

Yesterday for some (probably insane) reason I picked up the dead-tree edition of the New York Times and found that the magazine has an eight-page full-color article and spread on the barbaric practice, titled A Cutting Tradition
Inside a female-circumscision ceremony for young Muslim girls 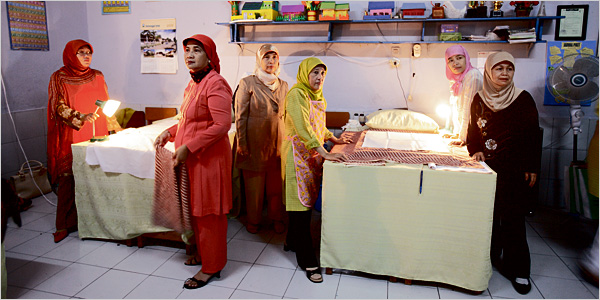 The description by Sarah Corbett makes it sound like the girls were going for a pedicure (emphasis added):

When a girl is taken — usually by her mother — to a free circumcision event held each spring in Bandung, Indonesia, she is handed over to a small group of women who, swiftly and yet with apparent affection, cut off a small piece of her genitals. Sponsored by the Assalaam Foundation, an Islamic educational and social-services organization, circumcisions take place in a prayer center or an emptied-out elementary-school classroom where desks are pushed together and covered with sheets and a pillow to serve as makeshift beds. The procedure takes several minutes. There is little blood involved. Afterward, the girl’s genital area is swabbed with the antiseptic Betadine. She is then helped back into her underwear and returned to a waiting area, where she’s given a small, celebratory gift — some fruit or a donated piece of clothing — and offered a cup of milk for refreshment. She has now joined a quiet majority in Indonesia, where, according to a 2003 study by the Population Council, an international research group, 96 percent of families surveyed reported that their daughters had undergone some form of circumcision by the time they reached 14.

I was actually shaking with anger when I finished reading this.

For starters, it is not circumscision. It is mutilation. It doesn’t take much to mutilate a woman’s external genitals.

The procedure itself is designed to deprive a woman from enjoying her sexuality for as long as she lives and carries dire medical consequences.

My friend Phyllis Chesler was reading the NYT article, too, and has this to say, Exactly Who are the Barbarians? Female Genital Mutilation as Pictured in the West

What is a human rights atrocity with life-long and life-threatening consequences is here being presented as a “tradition,” often a harmless one, sometimes not, but always a well-intentioned one.

According to the article, there is “little blood involved” – well, how bad can that be? And, “antiseptic is used” – well, this is not dangerous at all, is it? Finally, afterwards, the child is given a “celebratory gift” – what, am I the kind of westerner who, Grinch-style, would deny the child her gift in order to make my twisted, “racist” argument? As the article states , the child clutching (or drinking) her gift “has now joined a quiet majority in Indonesia.”

These photographs were taken in 2006 on a day where 200 girls were genitally mutilated . In honor of the “prophet Mohammed’s birthday,” the Assalaam Foundation subsidized both the mutilation – and the “gift.” According to the Foundation’s chairman of social services, the cutting/mutilation will “stabilize her libido;” “make a woman look more beautiful in the eyes of her husband”; and “will balance her psychology.”

Because you know, those husbands wouldn’t want any hysteria getting in the way.

Ninety six percent of all Indonesian families have sliced their daughters’ clitorises right off.

No orgasms for you, you naughty, wicked hussy of a child.

In the article, an Italian physician who is also a World Health Organization official states: “To judge them (the female mutilators) “harsly is to isolate them. You cannot make change that way. These mothers believe they are doing something good for their children.”

The Indonesian “cutting” is presented as less severe, less “extreme” than African versions. Oh yeah? Then why does one photo show us a child in extraordinary pain. Yes, right there in the New York Times. The caption is: “A girl cries as she is circumcized.” Well, it’s like being vaccinated, right? And there is a second photo of a highly anxious child just before the mutilation. This one is captioned: “A girl is soothed by an attendant before her circumcision.”

The photographer has captured a live human rights atrocity in progress and we are seeing it in color with our morning coffee and croissants. Or bagels. Or muffins. Whatever.

Who exactly are the barbarians here? Those who genitally mutilate their daughters or those who deem the atrocity as something of a soft core “tradition” to be “enjoyed” at Sunday brunch?

Phyllis is unsparing in her indictement of the NYT’s puff piece. She also links to Dr. Andrew Bostom’s article, Clitoral Relativism—Female Genital Mutilation in “Tolerant” Islamic Indonesia where he quotes from the British Medical Journal

Not surprisingly, FGM is outlawed in theUnited States and most Western countries, and there are concerted efforts to eradicate this barbaric practice, globally.

But just today, the barbarism of FGM is indeed referred to “misleadingly” as “circumcision” in a quintessential culturally (or if you prefer, clitorally) relative depiction by Sara Corbett published in the New York Times Sunday Magazine

My other friend Mary Madigan notices that Sara Corbett has a history of perverting the truth.

All the same, the NYT has now slipped from moral equivalence, dhimmitude and political correctness into embracing child abuse and mysogyny.

Update
Pushing the limits of cultural relativism: the lighter side of cannibalism

Unsurprisingly, todays co-called “feminist” blogs are awash with false outrage at meaningless trivialities, like Michigan Tech’s president implying that women should not be pressured into attending college if their ambition is not higher education, the societal implications of the new “skinny” offerings on the Starbucks menu, a Post-It ad, and some half-baked rant about Chris Matthew’s treatment of Hillary Clinton. There is nothing dealing head-on with the horrors women around the world are experiencing at the hands of real Patriarchal societies whose laws, practices, and yes, backward version of religion have established an inescapably oppressive construct that is now affecting a brand new generation.

It begs the question, of course: what is it that these women are afraid of? Is it so simple as a fear of the demon of multiculturalism, or a fear of being perceived as intolerant that leads them to do nothing more than pay lip service to the cruelty? Or is it something more? If this was such an innocuous practice, they certainly would not object to undergoing it themselves, but you would, rightfully, find none that would, so it cannot be that they believe this kind of thing is merely an artifact of a bygone era. Something must be preventing them from acknowledging a real cause for concern, a real plight of gender equality…something bigger.

It remains to be seen of course. Tomorrow, feminists across the country will celebrate a court decision that paved the way for international policies encouraging abortion as a legitimate reproductive right, which has in turn empowered countries to impose one-child policies, and for women in those countries to take advantage of international help to commit a genocide of the female gender — allowing nearly 60% of all female babies born in China and India to be killed.

So much for tolerance. Its time for a new idea.