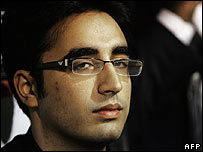 A friend just sent me this:
Head of Bhutto clan rejects new leadership

The head of the Bhutto tribe, a founding member of the Pakistan Peoples Party, has rejected the appointment of Benazir Bhutto’s husband and son to lead the group and predicted that it will split the party.

Mumtaz Bhutto’s comments threaten to reopen the deep fissures in the family, Pakistan’s foremost political dynasty. The Bhuttos started to fall out after the 1979 execution of Zulfikar Ali Bhutto, the nation’s first elected prime minister who turned the Peoples Party into its most potent political force.

In an interview Tuesday, Mumtaz, first cousin of Benazir’s father, Zulfikar, and a former senior official in the PPP, said that the leadership of the party should have gone to a “real” Bhutto.

Asif Ali Zardari, Benazir’s widower, was unrelated to the Bhuttos, while his son, Bilawal, carried the name Zardari until his mother was assassinated last week, when he took on Bhutto as his middle name.

“The party has come into existence on the name and the sweat and the blood of the Bhutto family,” said Mumtaz, 74, a long-time critic of Benazir who lives on a grand country estate in Mirpur Bhutto, the original family village in Sindh province. “Therefore, the leadership should either have gone to Sanam or Murtaza’s son or daughter.”

The article states that the Bhutto tribe has 700,000 people.

For now, the elections set for next week in Pakistan have been postponed until 18 February, but this Reuters article says that

The party of slain Pakistan opposition leader Benazir Bhutto does not want next week’s scheduled general election postponed because a delay would help its political opponents, a party spokeswoman said on Monday.

“We don’t want any delay. That’s what we have asked (for),” Farzana Raja said after the Election Commission met to consider delaying the Jan. 8 poll.
…
A lengthy delay could dissipate emotional support for the party and help the PML (Quaid-e-Azam), a party allied with President Pervez Musharraf who seized power in a 1999 military coup and is under intense pressure to hold democratic elections.

This morning Siggy posted on L’Affaire Bhutto: A Story Of Political Filth. You must read the whole post, since excerpts won’t do it justice. Siggy concludes with,

The Bhutto Affair proves one thing. Politics is a filthy business.

Maria sent me a NYPost editorial on how the Pakistani political crisis has presented Americans with a real test of which of the nation’s would-be presidents are fit for the Oval Office.

Meanwhile, Musharraff has just announced that UK investigators are to assist in the inquiry into the assassination. Gateway Pundit posts that Police Discover Bhutto Killer’s Head (Warning: Gross). The British investigators have their work cut out for them, since, as Ali noticed last week, firefighters were already hosing down all evidence of the bombing right after it occurred. Bhutto’s husband has refused an autopsy.

Jeremiah has more on an Australian Woman Asks Right Questions Re Bhutto Assassination – Plus, The Thot Plickens.

UPDATE
Pakistan Has Had Enough Words

And now for the overkill conspiracy theories:
Did A Hi-Tech Laser Beam Kill Benazir Bhutto?

Some food for thought: If the allegations about laser beam technology prove to be true…then the important question: How did this latest sophisticated US technology reach Pakistan?

Plweeez. The usual thirdworldista meme: Yet another attempt to blame everything on the US.

At least A. J. Strata has some sense:

The scientifically and technically challenged who got their education from Hollywood SciFi flicks are really showing off their ignorance. Lasers come in all different levels of energy. I would not worry too much about the lasers used to ‘paint targets’, they are designed to be invisible to the human eye. But if a high powered laser were to be used it would leave just as much of a signature as a bullet. A nice clean, cauterized path would be clearly evident. Of course, the power required for these kinds of laser beams require an equipment van the size of a semi-tractor trailer to house the beam forming components. You definitely are not going to see a hand held laser which can penetrate skin and bone (you know, the cranium) in less than a second anytime soon. And why would the US (or anyone) use such a device in the wide open when an autopsy would detect the unique form of damage in an instant?

Why is it all the scientifically and engineering ignorant inhabit the leftward fever swamps???? Someone explain THAT to me.

Because if they weren’t scientifically and engineering ignorant, they wouldn’t inhabit that fever swamp.