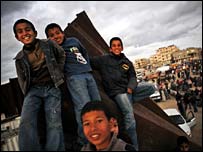 a Hamas border guard interviewed by The Times at the border today admitted that the Islamist group was responsible and had been involved for months in slicing through the heavy metal wall using oxy-acetylene cutting torches.

That meant that when the explosive charges were set off in 17 different locations after midnight last night the 40ft wall came tumbling down, leaving it lying like a broken concertina down the middle of no-man’s land as an estimated 350,000 Gazans flooded into Egypt.
…
Asked whether he had reported it to the government, he replied: “It was the government that was doing this. Who would I report it to?”

The people who got through went shopping,

Thousands of people were herding back cows, sheep and even camels from Egypt into the Gaza strip. Others brought back motorbikes while many women lugged back cans of olive oil and men could be seen weighed down with jerry-cans full of fuel.
…
Some staggered back into Gaza carrying televisions, and others sported brand-new mobile phones. In Gaza City, prices of cigarettes – which had skyrocketed during the total blockade of the past week – fell by 70 per cent in a few hours.

Flopping Aces has the history of the wall.

Egypt has said it will not use force to send back Palestinians who crossed from the Gaza Strip in large numbers after parts of the border were breached.
Foreign ministry spokesman Hossam Zaki said the border would be closed again when all the Palestinians had returned.

Tens of thousands have surged in to buy food and other supplies made scarce by an Israeli blockade – aimed at stopping rocket attacks from Gaza.

An Israeli blockade – but the wall is/was at the Gaza-Egypt border. Would the Beeb think of asking the Arab countries in the region why do they prevent their fellow Arabs from moving freely across borders?

It looks like yesterday’s clashes between Gazan women and Egyptian border guards were staged specifically for the purpose of doing this pre-planned operation in such a way that Egypt would be unwilling to interfere.

And it seems probable that everything we’ve seen over the past few days – Hamas closing bakeries, shutting the fuel plant, perhaps even the rocket barrages themselves last week – were all meant to play to world opinion, create a fake “crisis”, all ultimately to force Egypt to open Rafah, something that Hamas has been trying to do for months.

Would it ever occur to the Beeb and others – never mind to the Gazans, too – that perhaps living in peace with their neighbors, Israel and Egypt, could be a solution to their shortages and needs?

The possibilities are intriguing. Gaza can now integrate its economy with Egypt and start to build structures. If Tom Barnett, et al, are correct this will inevitably moderate their behavior. If, as is more likely (consider the Scorpion and the Frog), Hamas provokes a larger war with Israel, Gaza citizens will have an exit and can become real refugees, not the faux refugees they have been since 1948. In such a circumstance, the strictures that have been imposed on Israel by the human shields that Hamas has wielded so effectively, will loosen with results that have the potential to surprise many and change the dynamics of the confrontation in unforeseeable ways.

This could well be the start of very significant shifts in the Israeli-Palestinian dynamics; time will tell.