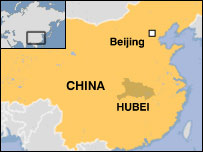 Via Wretchard, fifty city inspectors beat to death a blogger who filmed their confrontation with villagers protesting over the dumping of waste near their homes:

A scuffle developed when residents tried to prevent trucks from unloading the rubbish, Xinhua said.

When Wei took out his cell phone to record the protest, more than 50 municipal inspectors turned on him, attacking him for five minutes, Xinhua said. Wei was dead on arrival at a Tianmen hospital, the report said.

Now let’s look at the next statement:

Qi Zhengjun, chief of the urban administration bureau in the city of Tianmen, lost his job over the incident, Xinhua reported Friday.

Qi fared better than the hapless manager of the lead-toy factory who was put to death, or the toy vendors, who will be severely punished. But then, there’s the Olympics coming up and China’s working on cleaning up its act.

The BBC has more:

Local people attempted to stop a rubbish truck from dumping refuse at a site that they argued was too close to their village, state media reported.

Members of the Chinese municipal inspectors, known as the Chengguan, intervened.

A para-police force equipped with steel helmets and stab-proof vests, Chengguan personnel are often used by local officials as trouble-shooters.

The victim, Wei Wenhua, the manager of a construction company, was driving by and stopped to film the confrontation on his mobile phone.

When Mr Wei refused the Chengguan’s demands to delete the footage, he was beaten to death on the spot, according to witnesses cited by Xinhua news agency.

Five villagers were also injured in the incident, of whom three remain in hospital, Xinhua reported.

I venture guess that the USA, the EU and the UN won’t be making much of a fuss. After all Beijing has threatened to use its $1.33 trillion (Â£658bn) of foreign reserves as a political weapon to counter pressure from the US Congress.

Just another day in the New Old China.