Remember that $500million hostage deal I was posting about last week?

It turns out one of the hostages wasn’t even a hostage. 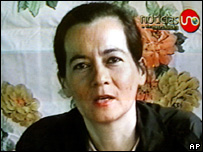 Colombian authorities say a malnourished boy matching Emmanuel’s description was brought to a hospital in San Jose del Guaviare in June 2005 and then wound up in a Bogota foster home, his real identity unknown.

The tests indicated a complete match between mitochondria in the blood of the boy – who has been given the name Juan David Gomez – and Ms Rojas’ mother, Chief Prosecutor Mario Iguaran said, quoted by the Associated Press news agency.

As The Guardian explains,

The release of the boy – the son of a hostage and one of her leftwing captors – had been offered as a key concession to Venezuela’s President Hugo Chavez, who was involved in an ill-fated attempt to free captives.

Again, more evidence that the FARC controls Chavez more than the other way around.