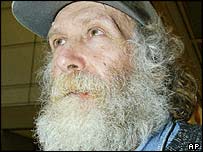 Chess legend Fischer dies at 64. He had been living in Iceland, where he was granted citizenship in 2005 as a way to avoid deportation to the USA, and

Mr Fischer was wanted for breaking international sanctions by playing a match in the former Yugoslavia in 1992.

He also had alienated many in his homeland by broadcasting anti-Semitic diatribes and expressing support for the 11 September 2001 attacks in New York.

Ed Morrissey has more on Fisher.

By the way, I don’t believe that madness and genius go together. I’ve known scores of insane idiots, and several very sane geniuses.

Steve Green’s article in TNI cited Paul’s highly restrictive position on immigration (to the right of Tom Tancredo), his hypocritical support of pork-barrel earmarks for his own congressional district, his opposition to various free-trade agreements (like NAFTA) on wacko-conspiratorial grounds that they surrender U.S. sovereignty to Evil International Institutions, and his appalling, blame-America-first version of “noninterventionism” in foreign policy.

To that, Wendy McElroy points to Cong. Paul’s pro-federal-interventionist anti-abortion bill (read her whole commentary), which would deny women the right to end a pregnancy and even deny the courts the power of judicial review in the matter — a clear violation of separation of powers, which is a curious position for this self-proclaimed champion of the Constitution.

But what can you expect from a religious conservative who, on Lew Rockwell’s website, rejected the Jeffersonian principle of a “wall of separation” between religion and government? As the congressman put it, “The notion of a rigid separation between church and state has no basis in either the text of the Constitution or the writings of our Founding Fathers.” For Ron Paul, then, “Far from mandating strict secularism in schools, it [the First Amendment] instead bars the federal government from prohibiting the Pledge of Allegiance, school prayer, or any other religious expression. The politicians and judges pushing the removal of religion from public life are violating the First amendment, not upholding it.” In other words, “libertarian” Dr. Paul believes the First Amendment was meant to allow state governments to promote religion in their laws and public institutions.

Thus, he supported legislation keeping the words “under God” in the Pledge of Allegiance and has voted in favor of a bill that, in defiance of a federal court decision, would allow a courthouse to maintain a display of the Ten Commandments. Such a display, of course, expresses specifically Judeo-Christian religious views, and represents government endorsing “an establishment of religion” — a particular religion. Like a fellow Baptist, GOP presidential candidate Mike Huckabee, Cong. Paul rejects the scientific theory of evolution and accepts the scientific rubbish of “Creationism.” One can only imagine what he would allow to be taught as “science” in state and local public schools.

This is not a political record or a philosophy of consistent support for individual rights and freedom. Rather, it is a record of support for an extreme “states’ rights” brand of federalism that — contrary to all legal precedents established in accordance with the 14th Amendment — would give a green light to wholesale violations of individual rights at the state and local level.

Libertarians are not pleased, indeed.

Because in Cuba there is no such thing as free healthcare.

Due diligence currently available identifies the routine and obvious risks associated with Western market participants. However, growing Islamic banking and Shariah-compliant industries promote themselves as hot new financial markets in which to invest. The attraction for U.S. and Western banks and investors is the $1 trillion and rising annual Saudi and Gulf state oil revenues.

Then again, like many other “innovative” products, the “ethical” and “socially responsible” Middle East and Islamic banking and investment market present many new risks not currently addressed either by their proponents or by regulatory agencies, much less due diligence services now available.

These markets and products lack transparency and Western accounting. Frequently, their documentation and offering statements do not disclose information required by federal laws and banking regulations. Furthermore, this market is increasingly governed by radical Islamic clerics whose provenance is unknown to the Federal Reserve Board, U.S. and international equities and bond ratings agencies, index providers and other insufficiently educated market participants and facilitators.

Data-mining software is available in the market today. But it lacks the ability to also analyze social and political networks and identify terrorist links. An important new program will shortly be available to fill that gap. It will also aid collection, processing, investigation, discovery, data-sharing and reporting intelligence.

The government needs this technology to stop terror financing. And businesses need objective consultants with regional expertise, language skills and access to the latest software to fully meet their “know you customer” and disclosure regulations.

Rachel and Cinnamon were my podcast guests last September.

Dr Helen Szamuely read about the Mao Cafe in Dublin and asks, What motivates this people?