It’s a sign of my present state of mind that I can’t even start to tell you, but it has a lot to do with politics.

I’m looking into taking tango lessons: Tango is difficult enough it should take all my concentration to do well in it, and the physical activity should keep my mind off politics when I’m not blogging about… politics.

I must be going through some developmental stage, or maybe one of the above primary stages.

Thompson didn’t give off the usual political vibe: the gnawing need to please, the craving for the public’s love. A few voters and journalists found this refreshing, many more found it insulting. Some just found it fascinating, in a clinical sort of way: What kind of politician isn’t consumed by politics–and what kind of campaign would such a politician run? Well, now we know. If Thompson could plausibly avoid an overnight campaign trip, he did, preferring to return home to his wife and children in suburban Virginia. He spent an inordinate amount of time with his briefing books.

When I remarked to my friend that Fred’s exactly the kind of guy I like, he replied that I obviously like guys that are too sane to be politicians, a point Andrew Ferguson makes in his article,

The man or woman who seeks out such a life and enjoys its discomforts is not normal. Not crazy necessarily, but not normal, and probably, when the chips are down, not to be trusted, especially when the purpose of it all is to acquire power over other people (also called, in the delicate language of contemporary politics, “public service” or “getting things done on behalf of the American people”). The case is made, in defense of the contemporary campaign, that this is an efficient if unlovely way to choose leaders: It winnows out those who lack the stamina and discipline necessary to lead a rich, large, powerful, and complicated country. By this argument, Thompson failed because he deserved to.

But the opposite case is easier to make–that the modern campaign excludes anyone who lacks the narcissism, cold-bloodedness, and unreflective nature that the process requires and rewards.

But artists like Fairey, and they are legion in our society, are really just — like their fans — playing at feeling oppressed. They actually have no experience with a real oppressive society. If they had their lives and work would not be nearly so glib.

An alternate point of view is on display daily at a site called “The People’s Cube.” This site is run by a talented artist who grew up under real oppression in the Soviet Union and managed to get out and start a new life here; a life who’s liberty he values. He’s not a “pretend” propaganda artist, but a man with experience in the real thing. His name is Oleg Atbashian.

Over at the People’s Cube I found this: Roger Waters Brings ‘The Wall’ To Muslim Countries

Richard asks This is global warming?

Following up on the Holocaust float at the Rio Carnival story, a judge has decided against it (h/t Conservative Belle):

A Brazilian judge barred a samba group on Thursday from featuring a Holocaust display and a dancer dressed as Adolf Hitler in its Carnival parade after fierce complaints from Jewish groups.

State judge Juliana Kalichszteim ruled the Viradouro samba group, or school, would be subject to a $110,000 fine for the float and $28,000 for the Hitler impersonation if it went ahead with its original parade plan.

The Viradouro samba school’s position was that

the float was “extremely respectful” and was meant as a warning about the horrors of the past so that they never happen again.

However, following complaints from Israelite Federation in Rio de Janeiro state and the Simon Wiesenthal Center, the judge ruled that

“Carnival should not be used as an instrument of hatred, any kind of racism and clear trivialization or barbaric and unjustified acts against minorities.”

Were the Viradouro go ahead with their original plans, they would be liable for $110,000 fine for the float and $28,000 for the Hitler impersonator.

This year’s parade theme is “Shockers”.

DUBAI, United Arab Emirates (CNN) — Large swathes of Asia, the Middle East and north Africa had their high-technology services crippled Thursday following a widespread Internet failure which brought many businesses to a standstill and left others struggling to cope.

One major telecommunications provider blamed the outage, which started Wednesday, on a major undersea cable failure in the Mediterranean.

A sign that the The Times are changing: front-page coverage of yet another Clinton donor scandal.

Here’s how Bill got his cut on the deal, and a big cut it is:

Just months after the Kazakh pact was finalized, Mr. Clinton’s charitable foundation received its own windfall: a $31.3 million donation from Mr. Giustra that had remained a secret until he acknowledged it last month. The gift, combined with Mr. Giustra’s more recent and public pledge to give the William J. Clinton Foundation an additional $100 million, secured Mr. Giustra a place in Mr. Clinton’s inner circle, an exclusive club of wealthy entrepreneurs in which friendship with the former president has its privileges.

Who says money can’t buy you [the Clinton’s] love?

And the love continues to grow as Bill places himself as intermediary for other big deals that involve nuclear technology,

That same month, Mr. Dzhakishev, the Kazatomprom chief, said he traveled to Chappaqua, N.Y., to meet with Mr. Clinton at his home. Mr. Dzhakishev said Mr. Giustra arranged the three-hour meeting. Mr. Dzhakishev said he wanted to discuss Kazakhstan’s intention – not publicly known at the time – to buy a 10 percent stake in Westinghouse, a United States supplier of nuclear technology.

At the same time as Bill was facilitating deals to provide nuclear technology to a Muslim country which has about one-fifth of the world’s uranium reserves, Hillary was signing letters to the State Department sounding “alarm bells” about Kazakhstan.

What I find interesting about this report is not that the third-term-co-President-to-be is deeply involved, since the Clintons have a really long record of such dealings from way back in the days when all it too was a $100,000 windfall in commodities trading, but that the NYT is giving it front-page coverage.

Maria also sent this Archived Profile: Frank Giustra, who continues to lend Bill Giustra’s Giustra’s MD-87 jet, complete with leather furniture and a stateroom, at least until Bill can get back into Air Force 1.

UPDATE
Across the big puddle, Clinton aide caught up in funding scandal:

The complaint against Morgan has been made by James Davenport, a former employee of Morgan Allen Moore, who claims Morgan breached the APPC code of conduct – specifically a clause governing the separation of private and consultancy activities – while working on the Hain campaign. Members of the APPC management committee first met on January 28 to consider the complaint. A spokesman told The First Post that, as a result, they have asked Davenport to provide more information and substantiate his allegations. The committee will meet on Monday, February 4 to reconsider the complaint.

Then there’s The Company You Keep (and Sometimes Discard), including Hillary’s Anti-Union, Slumlord Pals going back to 1999.

Tonight at 8PM Eastern I’ll be joining the guys at Heading Right. Will we start another drinking game? If we do, should it be over every time anyone says “Ronald Reagan”, considering that the debate will be held at the Ronald Reagan ranch in Simi Valley, CA?

After the debate, at 10:30PM Eastern, there’s going to be the wrap-up at Debate Central. Oour podfather Ed Morrissey will host, with Rick Moran and Duane Patterson will be there, too.

UPDATE
The debate transcript is here.

Yet another instance of governmental stupidity reacting to a “crisis” (in this instance, the economy)

In their bipartisan zeal to quickly cut a deal on an economic stimulus bill, GOP lawmakers overlooked something that will certainly inflame the conservative base _ illegal immigrants could receive a tax rebate check from the government.

The text of the House passed bill contains language making “non resident aliens” _ illegal immigrants _ ineligible for the tax rebates. But every year, hundreds of thousands of undocumented immigrants use individual taxpayer identification numbers, known as ITINs, to file income tax returns with the IRS. These ID numbers are used instead of Social Security numbers.

And now for the punch line:

According to a Senate GOP aide, Sen. John Ensign (R-Nev.) will try to offer a “fix” to the bill in the Finance Committee markup of the legislation today. Republican aides are also worried that under certain definitions in the House bill, a resident alien who spent at least 183 days drawing income in the United States but was deported – and still filed a tax return – could have a rebate check sent to their home country. Ensign will try to prevent this with an amendment to the bill, according to a GOP aide.

The $146 billion stimulus package intended to jolt the economy by giving taxpayers rebates up to $1,200 includes cash returns for illegal immigrants who pay taxes.

Under the plan passed by the House, illegal immigrants who qualify as “resident aliens” and earned a minimum of $3,000 would be eligible for rebates of between $300-$600, FOX News has learned.

First of all, tax rebates means we are all overtaxed.
2. No amount of tax rebate is going to stimulate the economy IF there is no cut in government spending.

But that aside,
What the hey is the GOP thinking, to go along with this kind of garbage anyway?

Why should workers (citizens working here and overseas, legal residents, and documented foreign workers) who are complying with the law subsidize those who are not?

Rep. Campbell will be on Lou Dobbs tonight. 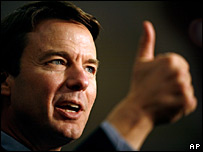 Former Sen. John Edwards is dropping out of the race for the Democratic presidential nomination, CNN has learned.

Edwards has told top advisers about his decision. It is expected he will announce it at a speech in New Orleans, Louisiana, at 1 p.m. Wednesday.

Stop the ACLU and James say it helps Obama.

On the other side of the aisle, The Giuliani Campaign Autopsy

UPDATE
Fark: “John Edwards anounces he will drop out of race today to spend more time with his hair”

Ralph Nader to the rescue!

Yesterday Siggy of Sigmund Carl and Alfred, Michael Van Der Galien of PoliGazette, and Rick Moran of Right Wing Nuthouse discussed the conflict between cultures, and the political implications for public policy.

…we participated in a terrific BlogTalk Radio podcast with Fausta, Micheal van der Galien of Poligazette and Rick Moran of Right Wing Nuthouse in which we discussed the differences between cultures for who creation is the highest expression versus cultures for destruction are the highest form of expression. Both Michal and Rick are astute observers and more than competent analysts. They possess teh capacity to see what is going on around them and understand what they are looking at- gifts not so common.

We also discussed what happens when cultures of creation meet cultures of destruction and the impact that confluence has on each.

We are going to continue this discussion in future podcasts. Our regular schedule is Tuesdays and Fridays at 11AM Eastern.

You can listen to yesterday’s podcast here.