Time Magezine: How Solid Was Hugo Chavez’s Base?

Until recently, Venezuela’s opposition was so weak and fragmented it seemed unable to even fathom an electoral victory. But, in the early morning hours on Monday, it sealed a surprising triumph over the constitutional reform proposal of a president who, in nine years, had never lost an election. Scrambling to explain this aberration in a land where Hugo Chavez dominates the political landscape, many political observers point to the thousands of university students, who, dormant until this year, clogged the streets to protest the reform in the weeks leading up to the vote. Raul Baduel, the former defense minister and longtime ally of the president, also injected life into the opposition when he, along with the former pro-Chavez party Podemos (Spanish for “We Can”), called for people to vote “No.” But the results raise another, perhaps more important, question: how much help did the opposition actually receive from the poor, Chavez’s main support base?

It used to be a given that Chavez could count on the lower class, which represents the majority of the population, to turn the vote his way. Clearly, after logging 49% of the vote for his controversial reform, Chavez still has many of the poor on his side. The electoral council has yet to release detailed results that would indicate how impoverished areas voted. But an abstention rate of 44% suggests some of Chavez’s traditional support base didn’t show up to vote. And, narrow as the vote count was, the rejection of his proposal only one year after he won reelection by a margin of over 20% raises the possibility that abstention was compounded by some supporters actually voting “No.” If, as interviews in Caracas this week suggest, more people in barrios disagree with Chavez’s political agenda, that’s worrisome for a man whose political raison d’etre is defined by alleviating poverty.

Here is Raul Baduel’s message explaining the reasons to vote NO (in Spanish, at his own blog, via Two Weeks Notice) MENSAJE DE RAUL BADUEL LUNES 12 DE NOVIEMBRE DE 2007.RAZONES PARA ACUDIR A VOTAR “NO”. One particular statement catches my eye:

As I see it, Baduel is saying two things:

Most importantly, he stressed that abstention isn’t effective. The military, Chavez’s own base, and the people of Venezuela were listening.

By these stressing these three points, he actively promoted a NO vote on the referendum on Chavez. Make no mistake, while Chavez can legally stay as president until 2013, Chavez himself turned this constitutional amendment poll into a referendum about himself.

Who is Raul Baduel?
From his blog

He graduated in 1976, 11th in a class of 86.
In 1982 he was one of the four founding members of the Movimiento Bolivariano Revolucionario (Bolivarian Revolutionary Movement) along with Hugo Chavez, Jesus Urdaneta and Felipe Acosta Carles.
On April 11, 2002 he led, as a Commander of Army Paratroopers, the operation that brought Chavez back in power.
From 2004-2006 he was Army Commander General. On June 2006 he was promoted to Chief General and appointed Minister of Defense, which he served until July 2007.
On November 5, 2007 he declared himself against the constutional reform. 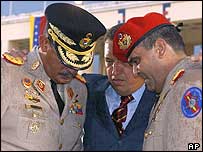 Gen Raul Baduel::Army Commander-in-Chief
Gen Raul Baduel was one of the officers who rose up against the short-lived Carmona government during the April 2002 coup d’etat, when he was chief of the 42nd Airborne Brigade of paratroopers.

Known for his new-age beliefs, Gen Baduel was the first senior officer to declare his opposition to the coup.

He helped organise the operation that rescued Mr Chavez from prison on the Caribbean island of La Orchila.

He was subsequently promoted to commander of the Maracay Garrison, before rising to commander-in-chief of the army in January 2004.

President Chavez’s military-civilian policy is a central tenet of the Bolivarian revolution, and began with Plan Bolivar 2000, a controversial internal defence and development exercise.

The general has rejected allegations of a rift within the army, saying that the group of dissident officers who declared themselves in legitimate disobedience in October 2002 “have strayed from the path of duty and turned their backs on the Venezuelan state because of a thirst for power and personal gain”.

But critics say Gen Baduel is one of a small group of officers “co-governing” Venezuela with Mr Chavez.

But in an unforeseen challenge to Mr. Chávez, the new leaders of this opposition have emerged from the disaffected within his own movement. They are hewing to leftist ideals while expressing increasing unhappiness with state control of the economy and the intensifying cult of celebrity around Mr. Chávez.

General Baduel, speaking at a news conference here on Monday, said “the people did not propose one comma or period to the text” of the defeated proposals, which would have formally created a socialist state. As a next step, General Baduel proposed that the country convene a new constitutional assembly to rewrite Venezuela’s laws.

Aside from General Baduel, other leaders whose stars are rising are Ismael García, a deputy in the National Assembly, and Ramón Martínez, governor of Sucre State in eastern Venezuela. Both men were supporters of Mr. Chávez but have vociferously distanced themselves from him in recent months.

They were joined by a student movement that led street protests here and in other large Venezuelan cities before the vote. In contrast with some traditional opposition parties, few of the student leaders describe themselves as conservative critics of the president, preferring to tout their own progressive ideals.

Please listen to last Sunday’s podcast:
In Sunday’s podcast Dr Luis Fleischman talked about General Baduel and how Baduel’s stance incited and encouraged the people to defeat the referendum
Dr. Luis Fleischman is an advisor to the Menges Hemispheric Security Project at the Center for Security Policy in Washington DC. He is also an adjunct professor of Political Science and Sociology at Wilkes Honor College at Florida Atlantic University.
Calrification: During the podcast Dr. Fleischman mentioned that Gen Baduel had been shot at. This article (in Spanish) states that Baduel was threatened by a man pointing a gun at him calling him “traitor” as Baduel was leaving his polling place after voting. (h/t Eneas Biglione of HACER)

Update:
In an email exchange with Rick Moran, where I said, “As I see it, he’s the one that made the result stand>”, Rick commented,

Absolutely. And I think his appearance on TV late on election night while all that stuff was happening at the CNE probably saved the vote from being hijacked. His insistence that the results be released immediately forestalled any attempt to manipulate the ballots.