Welcome to the New Year’s Eve Carnival of Latin America and the Caribbean. If you would like your post to be included in next week’s Carnival, please email me: faustaw “at” yahoo “dot” com.

This week’s big story-in-the-works is the purported release of three Colombian hostages, which has been delayed:

An operation by Venezuelan helicopters to collect three hostages due to be released in Colombia by the Farc rebel group has been delayed for a third day.
Venezuelan officials said the group had not provided the co-ordinates for the handover and that there was not enough time to complete the mission on Sunday.

The rebels have promised to release the hostages as a humanitarian gesture to Venezuelan President Hugo Chavez.

Mr Chavez said on Saturday that he hoped they would be released by Monday. 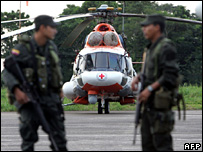 To a cynic like myself, it appears that Hugo’s not willing to share the limelight with anyone so don’t expect the hostages release to take place until the Bhutto story (and much else, for that matter) is not in the headlines. I hope I’m wrong, but my cynicism is greatly boosted by the fact that Oliver Stone’s at the location to film the release. For now, the FARCical mission has been put on hold.

For more on the hostages, please read the links under Colombia and Venezuela.

US ties to Latin America: Cool or cordial?

And one more for the road

Bolivia Amends New Constitution and Faces Mutiny from Within

The drug-financed FARC terrorists of the Colombian jungle, after offering up three hostages as a ‘Christmas present’ to Venezuelan dictator Hugo Chavez, have thus far stood him up, along with some 15 international observers from that many countries, an ex-presidente of Argentina among them and film director Oliver Stone. It’s like rain is coming down on their media circus and they’re starting to look less like clowns than fools.

Spare a thought for them as they cool their heels in the hot fetid Colombian swamp jungle near Villavicencio with nothing to do but talk to each other. The Brazilian among them is starting to complain about missing his New Year’s holiday, and they probably all are, wondering how the heck they got in that no-man’s land, waiting for a bunch of jungle terrorists who are now snickering up their sleeves at the suckers for fooling them again.

It doesn’t get more ridiculous than this. FARC, for the second time in about a month, has lied to Hugo Chavez and Hugo will go right on believing in them, worshipping them, trying to get their autograph, until they suckerpunch him again. After all, they know that Chavez’s keister is in the wringer and he’s just coddling them to try to win back his tattered international reputation. FARC doesn’t care about international reputations, FARC kidnaps innocents, blows up villages, lays land mines, employs child soldiers and controls the cocaine trade for a living. It gave up international reputations a long long time ago. But Chavez still wants his and FARC is pulling the rug out from under him. Chavez must feel like mierda right now. Snort!

Chavez’s $500million hostage deal in the works. Venezuelan helicopters to pick up Colombian hostages: the three-ring circus rolls right along

CUBA
The Cuba Archive has launched a Database of Documented Deaths believed to have resulted from the Cuban Revolution. This is an invaluable resource.

Castro is losing his last fight

DOMINICAN REPUBLIC
Getting Down and Dirty in the Bushes

NICARAGUA
Nica expats voice their opinion. A colombo-americana’s perspective has plenty more on Nicaragua and Latin America, and it’s a must-read blog.

Chavez vows to put “revolution” back on track

Of Puppets, Puppeteers, Hostages and Politicians

HUMOR
Via Larwyn, not quite suitable for work, but funny, Spicoli Divorcing, Announces Engagement to Chavez.

Special thanks to Siggy, Maggie, Eneas, Kate, Monica, and Obi’s Sister for their support in 2007.

For more Carnival fun, don’t miss SheBlogs #10 hosted by Sex and the South.

Wishing all of you a joyful 2008 filled with blessings, Happy New Year!