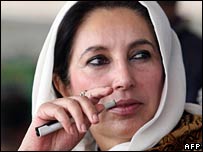 she was grasping and self-interested, a beneficiary of Saddam’s Oil for Food scam. Parade, in the kind of unvarnished look only possible before the assassination quotes Bhutto’s own niece saying, “She has no legacy of her own except for corruption and violence.”

Her deal with Pakistani President Musharraf to take the Prime Ministerial position for herself in the January 8 Pakistani elections would have broadened the regime’s base of support by allowing many thousands more snouts from her Pakistan People’s Party (PPP) into the trough. That was enough to make her a threat to the Islamists. Prophetically, Parade quotes a Musharraf insider saying, “She’s the No. 1 target of the terrorists right now.”

The assassination of Benazir Bhutto deals a blow to the hope for taking on the militants in the Pakistani sanctuary. It is also another sharp blow to the idea that political means can primarily or alone defeat Islamist terrorism.
…
With Musharraf out as Army Chief, his ability to manipulate promotions and bonuses in order to defend himself against further al-Qaeda assassination attempts is weakened. And without the cooperation of Bhutto his chance to widen the patronage-based political support of the regime is threatened.
…
In spite of all the blither about democracy in Pakistan, and the beatification of Bhutto by pundits and politicians eager to bask in her reflected false glory, the reality is that in the midst of the on-going carnage the so-called democratic forces are motivated by a desire for a piece of the action.

Read all of it.

Also at American Thinker, Walid Phares’s 2007: A Global Assessment of the Confrontation

Finally, General Musharaf’s government widened its military offensives during 2007 in the neo-Taliban zones, prompting terror counter strikes in various cities and a major Jihadi uprising in Islamabad. The escalation opened a window among political opposition to make gains against Musharaf. By the year’s end, Benazir Bhutto and Nawaz Sharif came back to the country and were leading the opposition in the next elections. The assassination of Bhutto was a setback to the political process. Musharraf and the secular forces need to coalesce around a platform of national security and democracy and move forward with elections and anti-Terror campaign in 2008. But for international security, the priority is to preserve Pakistan’s nuclear assets and keep the Jihadists at bay. Will secular opposition and the President understand this higher national priority in 2008?

The Economist on the Bhutto assasination: An assassin strikes

Even before Miss Bhutto’s murder, the election campaign had been bedevilled by political conflict and terrorism. The role of each of its main actors—including Miss Bhutto and Mr Musharraf—has been contested in the courts and on the streets, against a backdrop of worsening insurgency and Islamist terrorism.

Who ordered the killing?

Others posting:
Bhutto’s Assassination Is a Political and Cultural Honor Killing vs Pakistan’s ‘perfect storm’ a history test for policymakers, with a flashback to last October’s Bhutto’s vanity, NATO’s test and Pakistan’s future.

The Bhutto assassination and polarization in the wider war

The pundits on the political ramifications of the Bhutto assasination

Unfortunate Allies
We are still paying the price for Soviet aggression.

The Pakistani government has no problem with officials from Benazir Bhutto’s political party exhuming the slain opposition leader’s body if they see a need to do so, an Interior Ministry spokesman said Saturday.

People have plenty of rational reasons to mistrust Musharraf, but it’s difficult to see how he prospers with Bhutto’s assassination. Between her and Nawaz Sharif, Musharraf would most want to deal with Bhutto. He also needed the elections to go as scheduled for political cover abroad, and Bhutto had all but guaranteed that they would proceed without having to reshuffle the judiciary again. Killing both — Sharif got attacked as well — would only send the nation into a chaotic tailspin that Musharraf can’t afford with the insurgencies already active in the nation.