On his first trip to Kabul for a pre-Christmas visit to French troops in Afghanistan, 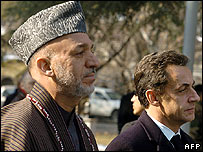 French President Nicolas Sarkozy has warned the international community must not let Afghanistan fall into the hands of extremists like the Taleban.
He was speaking on a one-day visit to Kabul where he met his counterpart, Hamid Karzai, and was due to see some of the 1,300 French troops based there.

Mr Sarkozy recently pledged France’s support for the US in Afghanistan.

He said the French troops, currently 1,900, would help the Afghan army, police, administration and judiciary. Sarkozy said a decision on troop numbers was due in the next few weeks.

Taliban leader Mullah Omar on Tuesday called on foreign forces to withdraw from Afghanistan. Diplomats and the local military have called for a new strategy to fight the rebels.

“What is certain is that we have not wanted to give the signal of departure, that would have been a despicable signal at a time when one sees the ravages inflicted by terrorism in the world,” Sarkozy said.

Britain, which has about 7,800 troops operating in Afghanistan, part of a 40,000-strong NATO stabilisation force, is expected to increase that number over time as it draws down in Iraq, but no formal announcement has been made.

For those of you asking, Napoleon didn’t ride the Universe.