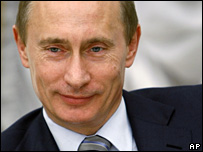 A Tsar is Born.

The 2007 honor went to the Russian leader because of Putin’s “extraordinary feat of leadership in taking a country that was in chaos and bringing it stability,” said Richard Stengel, Time’s managing editor.

Stability counts for a whole lot among some. Look how stable Cuba’s been all this time.

Putin named ‘Person of the Year’

President Putin will be legally obliged to step down as Russian president next year, but is likely to become prime minister if his ally, Dmitry Medvedev, wins the presidential election in March. 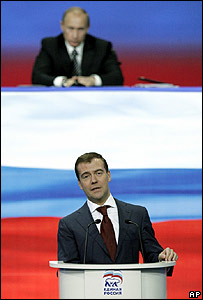 Update: Putin, Biped of the Year