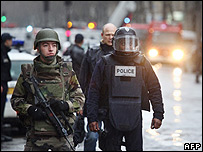 One killed by Paris parcel bomb

A parcel bomb explosion has killed one person and injured at least five others at law offices in central Paris.
The former law firm of President Nicolas Sarkozy is located in the same building as the office where the device exploded, at 52 Boulevard Malesherbes.
…
Another parcel bomb arrived at the same address, but remained unopened, officials said.

But this is what caught my attention:

The building also houses The Foundation for the Memory of the Shoah – a Holocaust remembrance body.

The package was delivered to the fourth floor of the building.

The police are searching for a motive.

UPDATE
Was the motive sexual harrassment?