I signed off early last night and woke up this morning to this good news!
The people have come through:
They have told Chavez that he is not invincible

Voters in this country narrowly defeated a proposed overhaul to the constitution in a contentious referendum over granting President Hugo Chavez sweeping new powers, the Election Commission announced early Monday.

An opposition group celebrated after the referendum. Venezuela had remained on edge since polls closed Sunday afternoon and the wait for results began. More Photos >
It was the first major electoral defeat in the nine years of his presidency. Voters rejected the 69 proposed amendments 51 to 49 percent.

The political opposition erupted into celebration, shooting fireworks into the air and honking car horns, when electoral officials announced the results at 1:20 a.m. The nation had remained on edge since polls closed Sunday afternoon and the wait for results began.

The outcome is a stunning development in a country where Mr. Chávez and his supporters control nearly all of the levers of power. Almost immediately after the results were broadcast on state television, Mr. Chavez conceded defeat, describing the results as a “photo finish.”

Hugo is losing his constituency:

Turnout in some poor districts was unexpectedly low, indicating that even the president’s backers were willing to follow him only so far.

The economy is in ruins:

Uncertainty over Mr. Chavez’s reforms, meanwhile, has led to accelerating capital flight as rich Venezuelans and private companies rush to buy assets abroad denominated in dollars or euros. The currency, the bolívar, currently trades at about 6,100 to the dollar in street trading, compared with an official rate of 2,150.

Venezuela’s state-controlled oil industry is also showing signs of strain, grappling with a purge of opposition management by Mr. Chavez and a retooling of the state oil company to focus on social welfare projects while aging oil fields need maintenance.

Petróleos de Venezuela, the state oil company, says it produces 3.3 million barrels a day, but OPEC places its output at just 2.4 million barrels. And private economists estimate that a third of oil production goes to meet domestic consumption, which is surging because of a subsidy that keeps gasoline prices at about seven cents a gallon.

Quico says: Venezuela rejects authoriarianism. It’s a historic day. The myth of Chávez-the-invincible is no more.

Thanks to everyone for your support. The road back to something like a real democracy will be long, but at least we’re on it now!

I give partial credit to Spain’s King Juan Carlos for helping to tip the margin of victory to the opposition. While it probably was not his intent to rally opposition to Chavez, when King Juan Carlos said “Why don’t you shut up?” to Hugo Chavez, he was heard around the world. 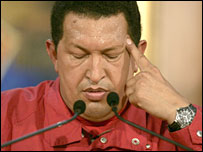 “Venezuela won today, democracy won today, and I am sure that this victory for the Venezuelan people will have a very important impact in the rest of Latin America,” Leopoldo Lopez, opposition mayor of Caracas’ Chaqua municipality, told the BBC.

This is a most significant event in the history of Latin America.

Chavez is not done, but for the first time in nine years he has been defeated at the very polls he has manipulated so often.

I don’t know what comes next, but for now, it’s good to see him sweat: 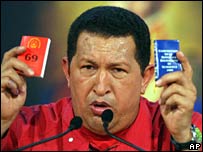 Update:
Welcome, Instapundit readers! Please listen to last night’s podcast on the Venezuelan referendum, and visit this week’s Carnival of Latin America and the Caribbean

GM Roper has the photoshop.
Wretchard’s commenters started off the wrong foot.
¡Gloria al Bravo Pueblo!
Ed Morrisey asks,Chavez loses – but does that vindicate him?

Having expressed those limits, does this election vindicate Chavez? If the results stand, has he not shown himself bound by the electoral process and therefore no dictator? Chavez almost had a no-lose situation in this sense; if he won the referendum, he’d get even more power thrust into his hands by popular acclaim, and if he lost, he’d prove himself a democrat, at least for now. The only way he could lose is if he claimed victory in a tight election, as everyone would have assumed he manipulated it.

The important calculation for Chavez is not a single data point — one election — but the thrust of his policy over the long term. He has shut down media outlets critical of his rule. He has nationalized industries. Chavez regularly sings the praises of Fidel Castro and makes no secret of his plans to turn Venezuela into a Socialist state using Cuba as a model. If he is not in fact a dictator at the moment, thanks to the momentary intervention of the Venezuelan people, he certainly aspires to that status. And the Venezuelan people need to keep him from realizing that goal.

Chavez should worry about this, too. The blinders are off, and Venezuelans have decided to push back against the creeping dictatorship. Chavez can’t bully them into compliance, and anti-Americanism has reached its limit. Does he have any other tricks in his bag?

Dan Riehl posts about the fireworks in San Felipe.

Update 3
No!
Interesting news from around the Web
Surprise; Chavez loses constitutional reform

Update, Tuesday December 4:
Via commenter Elmondo, On Chavez and Laughland

Who is Raul Baduel?