For some reason love’s been knocking at my spam door, and got through the filter:
Five of these: “Love Chat – someone that will take your breath away could be here”
Three of these: “Seeking Marriage Tired of dating? Read this.”
A couple of these: “You have a secret admirer”
More: “You have an online crush”. The crush doesn’t seem to want to give up; after I deleted those as spam, some more came telling me that “Unread crush – 1 message waiting.”
And then there’s: “Ortho Evra Information Did you use the Ortho Evra Birth Control Patch?”

In other EU news, Zeffirelli offers Pope a makeover

Zeffirelli told La Stampa newspaper that the Pope communicated in a cold way that was little suited to what was happening around him.

These are not times for high tailoring in papal vestments, he said.

He contrasted the relaxed attitude of the late Pope John Paul II to his official attire with that of Benedict.

Lacking his predecessor’s charisma, Pope Benedict has taken to wearing some eye-stopping outfits in public, such as a red velvet cape trimmed with ermine, not worn in public since the death of John XXIII in 1963.

Even when he favors all-white, I for one like the ermine cape. It’s so… Papal. 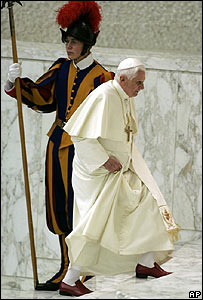