One of the saddest events of my life took place right after I had earned my driver’s license: I had to drive my mother (who can’t drive) to the funeral of a four-year-old who was shot by accident by his five-year-old brother.

The children were visiting at a house in the countryside for the weekend, where one of the guests arrived and left his suitcase open with a loaded gun in full view in a room with an open door. The boys thought it was a toy.

For many years after, I actively campaigned against guns, until I moved to Princeton. By sheer coincidence, I came across information on the part the NRA played in helping blacks avoid lynching during the Jim Crow South era.

A few years later I was at my home when a friend of my neighbor exposed himself to me in my own home. I was fortunate enough that he left the house immediately when I demanded he do so. I have no doubt about his intentions.

Afterwards, I told two women friends (who live alone) of my experience and they revealed to me that they have gun permits. Neither woman will be victimized, and both women recognize that by the time the police get to a crime scene, it’s too late for the victim. As one of them said, “I am a strong woman, but I’m not as strong as a man my size.” 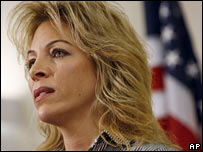 The BBC has a video of Jeanne Assam. Assam single-handedly stopped an assault on a church congregation by a murderer who had killed four people.

The BBC article and report do not mention the following:

[The gunman, Matthew] Murray was carrying two handguns, an assault rifle and over 1,000 rounds of ammunition, said Sgt. Jeff Johnson of the Colorado Springs Police Department

Via Gina Cobb, Jeanne Assam faced the crisis with courage and decisiveness:

Bourbonnais, who was among those shot by a gunman Sunday at New Life Church, watched as a security guard, a woman later identified as Jeanne Assam, calmly returned fire and killed the shooter.

“She just started walking toward the gunman firing the whole way,” said Bourbonnais, who was shot in the arm. “She was just yelling ‘Surrender,’ walking and shooting the whole time.”

Bourbonnais, 59, had just finished up a hamburger in the cafeteria on the sprawling church campus when he heard gunfire, he recalled.

He headed in the direction of the shots as frightened people ran past him looking to escape to safety.

Bourbonnais said he pleaded with the armed guard to give him his weapon.

“Give me your handgun. I’ve been in combat, and I’m going to take this guy out,” Bourbonnais recalled telling the guard. “He kept yelling, ‘Get behind me! Get behind me!’ He wouldn’t hand me his weapon, but he wouldn’t do anything.”

There was an additional armed security guard there, another man, who also didn’t fire, Bourbonnais said.

Bourbonnais yelled at the gunman to draw his attention, he said.

“First, I called him ‘Coward’ then I called him ‘S—head’ ” Bourbonnais said. “I probably shouldn’t have been saying that in church.”

That’s when the shooter pointed one of his guns at Bourbonnais and fired, he said.

Bourbonnais ducked behind a hollow, decorative pillar and was hit in the arm by a bullet and fragments of the pillar.

At about that moment, Assam turned a corner with a drawn handgun, walked toward the gunman and yelled “Surrender!” Bourbonnais said.

The gunman pointed a handgun at Assam and fired three shots, Bourbonnais said. She returned fire and just kept walking toward the gunman pressing off round after round.

After the gunman went down, Bourbonnais asked Assam, a volunteer security guard with the church, how she remained so calm and focused.

“I was asking the Holy Spirit to guide me the entire time.”

Murray didn’t show up to shoot a couple of people and call it a day. Two handguns, an assault rifle, and over a thousand rounds of ammunition would have equaled a church full of corpses had Assam and others not been able to defend themselves and their fellow parishioners. Before Murray had a chance to really open up on what he assumed was a defenseless congregation, Assam used her training and preparation to save dozens of lives, at the least.

Over the weekend, Mitch and I discussed the Omaha mall shooting, where eight people died in a “gun-free zone” when a lunatic started sniping shoppers. Some questioned whether a CCL holder with a pistol could outmatch a lunatic with a rifle. This shows exactly what one trained shooter can do to defend against someone who randomly selects unarmed targets for slaughter.

And this is the folly of “gun-free zones”. Lunatics looking to kill people either will attack at places for which they have some animus (as in the case of the church) or where they can find a lot of unarmed people (as in Omaha). They don’t stop because someone puts up a sign designating a site as gun-free, any more than people stop taking drugs because a city puts up a sign that designates a neighborhood as a “drug-free zone”, as in my own neighborhood.

All that sign does is prevent the Jeanne Assams from being able to defend the defenseless. That’s all it does. It doesn’t make anyone more secure or safe, and it has the potential to make a lot of people into victims.

After the Virginia Tech shooting, people asked whether a CCL holder could have made a difference once the shooting started. Jeanne Assam answered that question on Sunday.