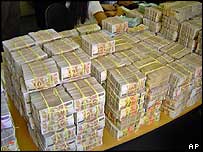 The vote held before dawn after months of contentious debate fell four votes shy of the 60 percent majority needed to extend the tax until 2011, meaning Silva’s administration stands to lose about 40 billion reals (US$22 billion) in revenue per year.

The money is used to fund programs ranging from health care to the president’s famed anti-hunger program aimed at lifting Brazilians out of misery.

The government could try to get the tax levied on everything from checks to bank transfers renewed again next year, but the measure wouldn’t go into effect until three months after passage.

As a result of the vote, the tax will be lifted on Dec. 31, creating an immediate budget shortfall.

Today in Business
Fed leads drive to strengthen bank systemNorthern Rock CEO steps down earlier than plannedU.S. and China highlight need for cooperation after trade talks
The tax, known in Brazil as the CPMF, was established in 1993 as a temporary measure to subsidize the country’s public health care system. It charges a 0.38 percent fee on all financial transactions nationwide.

The tax extension had already passed in Brazil’s lower house of Congress, but senators who opposed the bill argued that the CPFM has elevated the nation’s tax burden as government spending rose faster than economic growth.

“The CPMF is a regressive tax that penalizes the poor, without their awareness of it,” said opposition Sen. Marco Maciel, a leader of the right-of-center Liberal Front Party. “We need to reject the tax in favor of a true fiscal adjustment that reduces the tax burden so that the country can grow at more robust, sustainable rates.”

The tax has been in place since 1996. It accounts for about 40 billion reais ($22.7 billion) in revenue and is set to expire in December unless it’s approved by the Senate. The CPMF is a 0.38 percent levy on financial transactions such as bank withdrawals.

And the problem is that the CPMF allowed the government to continue unsound economic policy:

Virgilio, of the Brazilian Social Democracy Party, said revenue from the tax allows the government to avoid needed cuts in spending and will obligate the next administration to take more drastic measures.

“With the tax, the government will continue to throw hot coals onto the fire, leaving the problems for the next president,” he said.

[Roberto Padovani, a senior strategist at WestLB AG in Sao Paulo] said the central bank may adopt a more prudent monetary policy because the end of the tax will increase disposable income, which may end up fueling consumption.

“The impact on domestic interest rates would be very bad,” Padovani said yesterday before the vote. “The central bank will have to have a more cautious policy. It will also slow the improvement on the debt level and that would increase rollover costs.”

The immediate problem is that the repeal of this tax creates a budget crisis and will affect infrastructure and social services funding.

However, by not renewing the onerous tax on financial transactions, Brazil – one of the BRICs (Brazil, Russia, India and China) four emerging giants – has taken a decisive step towards fostering economic growth and wealth creation.