Straight from that arm of the vast right-wing conspiracy, the BBC: 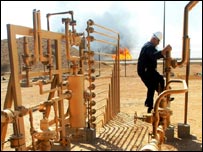 Iraqi oil production is above the levels seen before the US-led invasion of the country in 2003, according to the International Energy Agency (IEA).
The IEA said Iraqi crude production is now running at 2.3 million barrels per day, compared with 1.9 million barrels at the start of this year.

It puts the rise down to the improving security situation in Iraq, especially in the north of the country.
…
Iraq has the third-largest proven oil reserves after Saudi Arabia and Iran, but exports plummeted in the face of the insurgency that flared up following the US-led invasion.

And via Gateway Pundit, Sunni tribesmen are helping on the reconstruction of the Shia Al-Askari shrine in Samarra.

All of this points to further progress on reconstruction efforts. As I posted on October 19, the PRT teams

Their aim is to engage directly with Iraqis at the local level to understand what people really need and how is the government meeting those needs.

The point of the PRT teams is to develop strong, long term relationships that will withstand whatever shock may come.

It is a start, a very promising start.

You can hear more about reconstruction in Iraq in this podcast with Matt Sanchez, Michael Fumento and Siggy.