Hero of the year: 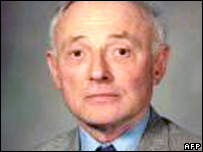 Siggy has The Other “Person Of The Year”, Dr. Liviu Librescu, who saved the lives of his Virginia Tech students at the cost of his own.

Click on the photo above for more on Dr. Librescu.

As far as TIME’s kleptocrat goes, Vladimir Putin will now use Time magazine’s honor to enhance his own power, as one would expect. 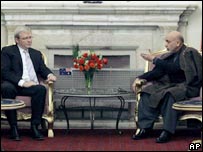 Mr Rudd said: “We’re committed to being here for the long haul.”

He added: “Over the next several months, I would also be encouraging other friends and partners and allies in Nato to continue their commitments and where possible extend them.”

Skip the lede of this story and check the numbers at the link. Even the best showing for the candidates, Barack Obama (-6%) and John McCain (-11%) have bigger negatives than positives among all voters. This doesn’t bode well for the 2008 campaign in either the primaries or the general election. Not only has no one really caught fire, but no one has managed to convert more voters than they’ve driven off.

At least neither party has an “annointed”.


Full of make-believe and festivity, this wonderful narrative poem possesses a Mozartean lightness and wit. Luckily, several modern versions, particularly those by W.S. Merwin and Simon Armitage, deftly replicate much of the feel and rhythm of the Middle English original. On New Year’s Day an eerie Green Knight challenges a champion from King Arthur’s court to exchange ax blows. Sir Gawain duly slices through the stranger’s neck, only to see the decapitated torso pick up the head, which then speaks: Remember, the Green Knight says, to meet me in a year and a day at the Green Chapel. But where is that? The following winter, riding to what must be certain death, Gawain finds himself alone and desolate on Christmas Eve. Miraculously, a castle hoves into view. There the famous knight is welcomed by a red-bearded lord, the man’s beautiful lady and a hideous bent-backed old woman. For the next three days Gawain savors all the sumptuous delights of the Christmas season–while each morning in his bedchamber the seductive wife tempts him to surrender to more sinful pleasures. There are, however, mysteries about this castle–and they are not resolved until Gawain fearfully bows his head to receive the promised ax stroke from the Green Knight.

Sir Gawain is one of my favorite books, and you can find it on line here. I suggest you read the modern English versions, since the Middle English is particularly difficult.

The other four books are


Let everybody else wear a red sweater!