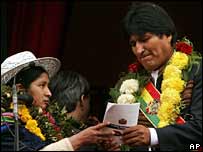 The deputies at the Constituent Assembly approved one version but Evo received a different one; VCrisis has the captures. The first version states that the power comes from the people while the second version stresses the preselection of candidates. Gateway Pundit has more.

At play? Natural gas, which Gazprom is eyeing, along with Brazil and Chile.

If these districts can secure themselves against the central government, this could get very, very ugly. Natural gas is their chief export and their resource for hard currency. If the breakaway districts can keep it for themselves and safely export it (mainly to Brazil), they can build a significant war chest while leaving Morales to feed the rest of Bolivia’s poor in the west. That will prompt Morales to march on the east, perhaps assisted by Chavez in Venezuela, and a civil war will almost certainly erupt — and sooner rather than later.

Publius Pundit, Blue Crab Boulevard while Marginal Revolution asks, What does Bolivia have to do to make the front page?