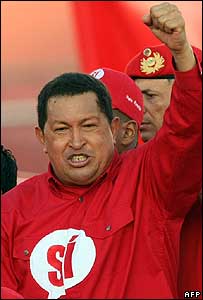 In today’s headlines, Chavez Threatens US Oil Supply and is sending troops to “protect” the country’s oil fields, while declaring the opposition a CIA operation.

As it turns out, Stan Goff at the Huffington Post swallowed the fake CIA memo story whole, hook, line and sinker. Of course – at least according to Stan – the Venezuelan “government was democratically elected (unlike our own)”.

Yesterday I posted about the Chavista propaganda surge, which has come in the midst of more unfavorable poll numbers. I wasn’t the only one noticing: Juan Forero of the WaPo reports, Chavez Bluster Surges Ahead of Referendum. Some Observers Link Talk to Tight Contest

On the eve of a referendum that President Hugo Chávez has cast as a plebiscite on his rule, the populist leader is escalating his verbal assaults on foes real and imagined, picking a fight with neighboring Colombia one day and assailing Catholic Church leaders as “mental retards” the next.
…
“He’s decided that his best tactic to recover the control of his movement is to instill fear in his people that there’s a world conspiracy against Venezuela,” said Demetrio Boersner, a political analyst and former diplomat. “It’s a tactic that uses histrionics as a weapon to unite the people so they vote for him on Sunday.”

In addition to threatening to cut the US oil supply, calling the troops, and getting into fights with neighbors and Church, he’s also threatening to throw out CNN (which earlier this week Hugo had been accusing of instigating his murder).

I’m not sure why William Ratlieff’s article only shows up on Trinidad News, since apparently TN got it from AP/WaPo, but here it is in its entirety:

How the vote can fool Venezuela
On Sunday, Venezuelans will be asked to vote on a whopping 69 constitutional amendments that would greatly reduce the country’s democratic governance, strip citizens of still more individual liberties and thus expand President Hugo Chavez’s power even beyond what it is today.

The sad reality is that voters will probably approve the amendments, as Chavez’s opponents have been bumbling around, discredited, disorganised and intimidated.

The vote will be bad not only for Venezuela, but for the rest of Latin America. Chavez-style demagogues -“Chavistas”-are taking control throughout the region, persuading frustrated voters to jettison their often unresponsive democratic governments for the promise of something better, even if that something is a populist dictatorship.

Chavez already has assumed some of the powers he wants legitimised in the upcoming referendum. Approving the changes will merely legalise what is already in place and further reduce the options and safeguards available to those who disagree with him and his vision of “21st-century socialism.”

One of the most disturbing ballot items would allow Chavez to run for president as often as he wishes and make it more difficult for voters to recall a president. He could become, in effect, president for life.

Other ballot items would give Chavez greatly expanded control over the country’s state and regional governments, its central bank and its international monetary reserves, and would extend his authority to expropriate private property.

Other ballot measures would increase presidential authority to declare and maintain a “state of emergency” for as long as the government deems necessary and significantly curtail the financial privileges of human-rights groups, the media and other non governmental watchdog organisations.

Why would Venezuelans vote to curtail their own liberties?

First, because the people remember that previous governments failed to serve popular interests, while Chavez promises them perks, such as six-hour workdays and redress of their grievances against domestic and foreign oppressors, including the United States.

Self-destructive voting also can be understood in the context of the region’s centuries-old Indian-Iberian culture, which historically stresses a paternalistic relationship between rulers and people, even if this paternalism in reality serves the wishes of the few over the needs of the many.

Today, Chavez has vast oil revenues, however badly managed, with which to fund popular programmes and finance his country’s deteriorating economy and rampant corruption. In time, those who support Chavez will learn that his socialism is nothing but a rehash of the elite-serving stingy populism of the past. But with oil prices still rising, that day of reckoning may be years away.

There is one decisive difference between the democracy that opened the door to Chavez and the new system Chavez is building. While the former increasingly failed many in the country, its leaders could be-and finally were-voted out of power in reasonably honest, contested elections.

By the time Chavez’s supporters realise they have been sold a bill of goods, they may find themselves living under a system that allows no more freedom to choose than Fidel Castro has allowed in Cuba over the last half-century.

The Venezuelan experience demonstrates clearly that when voters’ perspectives are incomplete and their passions are ripe for manipulation, popular democracy may not serve their interests, but may lead to their virtual enslavement.

Venezuelans can still block this steamroller by rejecting the reforms. If they don’t, by the time they wake up, it may be too late.

Ratliff is a research fellow at the Independent Institute in Oakland, Calif., and at the Hoover Institution at Stanford University.

Donald Rumsfeld, in tomorrow’s Washington Post, says that the best way to beat tyrants like Chavez is through free trade, the creation of a 21st-century “U.S. Agency for Global Communications” to inform, to educate and to compete in the struggle of ideas, strengthening NATO through building bilateral and regional partnerships with other like-thinking countries — such as India, Singapore, Australia, Japan, South Korea and Israel, and by realizing that complacent assumption that our domestic and global institutions, in their present form, can meet these growing menaces are inadequate to the task.

Meanwhile, The People’s Voice is nearly orgasmic with praise for Hugo:

A negative vote (or a successful US-backed civil-military uprising) will reverse the most promising living experience of popular self-rule, of advanced social welfare and democratically based socialism.

Too bad they didn’t bother reading what the constitutional ammendments are about. They would have realized that Hugo’s promise of 43 more years of rule (when he would turn 96) is not an empty threat.

Eying Chavez’s achievements after a decade in power, it’s easy to share in Bolívar’s frustration. The former paratrooper’s vision of a new Venezuela remains as distant as the general’s dream of a united continent. Meanwhile, the optimism that accompanied Chávez’s meteoric rise is long gone. Instead of bringing revolutionary change, his Fifth Republic has merely swapped the old oligarchy for an equally corrupt Bolivarian bourgeoisie.

Along the way, his administration has embezzled or squandered vast oil revenues; alienated businesses, the media, the middle classes and a broad tract of the political left; systematically eroded checks and balances; and replaced civil discourse with a dangerous and jingoistic militarism. Price fixing has led to chronic food shortages; a vast chain of workers’ cooperatives remain stuck in neutral; currency controls and nationalisation have driven away foreign investment; economic mismanagement has raised the spectre of runaway inflation; and a chronic lack of transparency has fostered a culture of corruption and unaccountability.

Unable to solve these problems, Chavez has returned to Bolivar for inspiration; like his hero, he’s sought to amass ever more power around the executive, shoring up his own rule even as the ideological edifice upon which it was founded atrophies.