I first read about it a few hours ago at Gateway Pundit’s: Hero Hugo Hails Agreement With FARC For Hostage Release 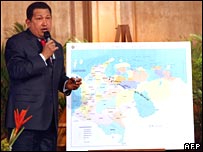 The Beeb had this on the story: Chavez Farc hostage plan approved

The Colombian government has approved a plan by Venezuelan President Hugo Chavez to send planes into Colombia to pick up rebel-held hostages.
The Colombian rebel group, Farc, said it would free two hostages and a child but only to Mr Chavez.

Mr Chavez had told reporters in Venezuela’s capital, Caracas: “The only thing we need is authorisation from the Colombian government. We hope they will cooperate with us.”

Unfortunately the FARC was saying as much two weeks ago

Clara Rojos, her son Emmanuel, who was born in captivity, and Consuelo Gonzalez, a former lawmaker kidnapped in 2001, would be released in Colombia to Mr Chávez “or someone he designates”, the Revolutionary Armed Forces of Colombia, or Farc, said in a statement to Cuban news agency Prensa Latina. The statement, dated December 9, did not say when the release would take place.

The three hostages in question are Rojos and her son, and former congresswoman Consuelo Gonzalez, who was kidnapped in 2001.

A colombo-americana’s perspective is following the story, which involves a $500 million ransom, and she asks,

We’ve learned that this exchange will cost $500 million. From where is this money coming? Colombian coffers? Venezuelan coffers? Private funds of the families/friends? No details were revealed. It seems like a lot, and to be sure it is; however, I am quite confident that Chavez would be willing to do as much as he could in order to get control over even part of Colombia, since Uribe isn’t a pushover like Correa, Morales, and Ortega. Equally important, to where is this money going? Directly to the FARC, that is to say, in cash? In the form of food? provisions? medicines? The lack of transparency in this aspect, despite Chavez mentioning repeatedly how he insists on transparency in the physical act of the exchange is thoroughly disturbing. It is truly a shame that the lives of so many individuals –not just those being highlighted– have become a political tool with which only Chavez can truly gain; and, it is even more unfortunate that many, particularly those in the US connected to the case, fail to realize that.

Former Argentinian president (and now First Husband) Nestor Kirchner will be heading the delegation, just in time to take people’s minds off the moneybags from Hugo scandal.

Considering how much pressure France has been exerting on behalf of Ingrid Betancourt – France has even agreed ‘to take in’ Farc rebels – one can’t help but wonder how much more money would be involved in her rescue ransom.

$500 million will go a long way towards financing further FARC terrorism, for sure.