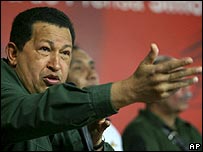 The day before the referendum Chavez was saying he would rule for 43 more years, until 2050. After his defeat, he’s singing a different tune – he’s trimmed off 37 years off that number:

Venezuelan President Hugo Chavez has said he will step down when his current term expires in 2013, following the defeat of his reform proposals.

Since he was talking to his base, he had to signal that he’s not done yet;

Mr Chavez says he will launch a second attempt to get his reforms through, possibly involving his supporters more in the process.

Of course he will try.

But the point is that the vote had to have been
1. massively “NO”
2. from his core constituency
in order to make Chavez announce that he’s stepping down in six years.

Radar de los barrios resoundedly said NO to a president-for-life. So did many of his neighbors.

The military have also shown that they will not blindly keep Chavez in power. Raul Baduel, by insisting that the country not descend into Chavez’s coup, had indeed changed the Chavista roadmap.