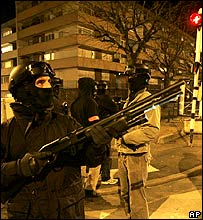 Rioting spreads to Tolouse as 20 cars were burned out and rioters set fire to two libraries.

A third night of youth rioting in France:

Youths rampaged for a third night in the tough suburbs north of Paris and violence spread to a southern city late yesterday as police struggled to contain rioters who have burned cars and buildings and – in an ominous turn – shot at officers.

A senior police union official warned “urban guerrillas” had joined the unrest, saying the violence was worse than during three weeks of rioting that raged around French cities in 2005, when firearms were rarely used.

Bands of young people set more cars on fire in and around Villiers-le-Bel, the Paris suburb where the latest trouble first erupted, and 22 youths were detained, the regional government said. In the southern city of Toulouse, 20 cars were set ablaze. Fires set at two libraries were quickly brought under control.

Despite the renewed violence, France’s prime minister said the situation was calmer than the two previous nights. About 1,000 officers were on patrol in trouble spots in and around Villiers-le-Bel, he said.

The government was striving to keep violence from spreading in a stern test for new President Nicolas Sarkozy, which highlighted the anger that still smolders in France’s poor neighborhoods, where many Arabs, blacks and other minorities live, largely isolated from the rest of society.

No Pasaran posts on a murder in the RER D line, probably unrelated to the rioting.