Mind you, the King not only told him to shut up, King Juan Carlos told him in the most in-you-face disrespectful way. Thank you, your majesty. 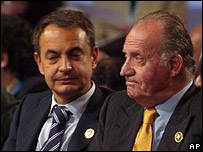 The King and Chavez: Chavez reaching the deep end

Not one to stop when having dug himself into a hole, now Chavez Accuses King of Coup Knowledge

Red Liberal has a selection of Spanish bloggers posting on the story.
More at Spanish Pundit

Via Beth, The Arab Invasion of South America

MEXICO:
‘I Wish My American Friends Who Fret About Mexican Immigrants Could Be Here with Me…’

NICARAGUA
The recent missteps of Danielito in Chile

PERU:
Peru and other menaces

TRINIDAD
Trinidad must be stopped

Hugo Chavez’s criminal paradise: Under the anti-globalization president, Venezuela has become a haven for global crime.

Would you like to send a link to next week’s Carnival on Monday November 19? Email me: faustaw “at” yahoo “dot” com