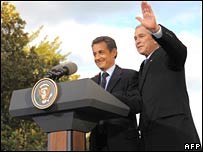 From the very beginning, the American dream meant putting into practice the dreams of the Old World.

From the very beginning, the American dream meant proving to all mankind that freedom, justice, human rights and democracy were no utopia but were rather the most realistic policy there is and the most likely to improve the fate of each and every person.

America did not tell the millions of men and women who came from every country in the world and who—with their hands, their intelligence and their heart—built the greatest nation in the world: “Come, and everything will be given to you.” She said: “Come, and the only limits to what you’ll be able to achieve will be your own courage and your own talent.” America embodies this extraordinary ability to grant each and every person a second chance.

Here, both the humblest and most illustrious citizens alike know that nothing is owed to them and that everything has to be earned. That’s what constitutes the moral value of America. America did not teach men the idea of freedom; she taught them how to practice it. And she fought for this freedom whenever she felt it to be threatened somewhere in the world. It was by watching America grow that men and women understood that freedom was possible.

What made America great was her ability to transform her own dream into hope for all mankind.
…
But my generation did not love America only because she had defended freedom. We also loved her because for us, she embodied what was most audacious about the human adventure; for us, she embodied the spirit of conquest. We loved America because for us, America was a new frontier that was continuously pushed back—a constantly renewed challenge to the inventiveness of the human spirit.

My generation shared all the American dreams. Our imaginations were fueled by the winning of the West and Hollywood. By Elvis Presley, Duke Ellington, Hemingway. By John Wayne, Charlton Heston, Marilyn Monroe, Rita Hayworth. And by Armstrong, Aldrin and Collins, fulfilling mankind’s oldest dream.

What was so extraordinary for us was that through her literature, her cinema and her music, America always seemed to emerge from adversity even greater and stronger; that instead of causing America to doubt herself, such ordeals only strengthened her belief in her values.

What makes America strong is the strength of this ideal that is shared by all Americans and by all those who love her because they love freedom.

America’s strength is not only a material strength, it is first and foremost a spiritual and moral strength. No one expressed this better than a black pastor who asked just one thing of America: that she be true to the ideal in whose name he—the grandson of a slave—felt so deeply American. His name was Martin Luther King. He made America a universal role model.

The world still remembers his words—words of love, dignity and justice. America heard those words and America changed. And the men and women who had doubted America because they no longer recognized her began loving her again.

Say Anything has the video of the whole speech.

Later on, at Mount Vernon, US President George W Bush and French President Nicolas Sarkozy have said they will work jointly to convince Iran to give up its nuclear programme.

What’s particularly interesting is that, years ago when the Bush presidency was new and Iraq was a fresh issue, the left told us constantly that George Bush was making America less popular in the world. Yet during the President’s term in office three of our traditional allies (Canada, Germany and now France) elected leaders that displaced virulently anti-Bush and anti-American leaders with people more of Sarkozy’s temperament (Stephen Harper in Canada and Angela Merkel in Germany).

We’ll see what the media reports on the rest of the trip.

More blogging later, when I’ll be posting about Venezuela.