Via Gateway Pundit, at the New York Times,

At the Times of London,
Road From Damascus
Iraqis are voting with their feet by returning home after exile:

The figures are hard to estimate precisely but the process could involve hundreds of thousands of people. The numbers are certainly large enough, as we report today, for a mass convoy to be planned next week as Iraqis who had opted for exile in Syria return to their homeland. It is one of the most striking signs that not only has violence in Baghdad and adjacent provinces decreased dramatically in recent months, but confidence in the economic and political future of Iraq has risen sharply. Nor is this movement the action of men and women who could easily reverse course and turn back again. Tighter visa restrictions imposed by Damascus mean that those who are returning to Iraq cannot assume that they could quickly retreat again to Syria if that suited them. This is, for many, a one-way decision. It represents a vote of confidence in Iraq.

The homecoming is not an isolated development. The security situation in Baghdad, while far from totally peaceful, has improved substantially in the past few months, with civilian fatalities falling by three quarters since the early summer. This has been reflected on the streets with markets, clubs and restaurants that had been closed for months, especially at night, now reopening. This good news has not attracted the attention that it should because critics of the conflict in 2003 and its aftermath have been extremely reluctant to acknowledge progress in the country. Yet even observers from publications long hostile to US policy in Iraq, such as The New York Times, are finally conceding that “the violence has diminished significantly since the United States reinforced troop levels in Iraq and adopted a new counter-insurgency strategy”.

The “surge” associated with General David Petraeus is indeed paying extraordinary dividends. The positive effects were seen in Anbar province, which had become a hotbed of Sunni resistance to the overthrow of Saddam Hussein, and are increasingly seen in the Iraqi capital. It has enabled Sunnis to disassociate themselves decisively from al-Qaeda in Iraq, in effect switching sides, while some of the extreme Shias linked to the rebel cleric Moqtada al-Sadr have felt obliged to observe a ceasefire. All these fundamental shifts have allowed Iraqis the chance to rebuild an economy that, particularly with oil at its current price, should be among the strongest in their region. This opportunity has been recognised by exiles such as those who have been located in Syria. Iraq can only benefit from the return of some of its most talented citizens

But there is another statistic which is also important – the number of terrorists killed and captured, and the amount of weapons caches seized and destroyed. 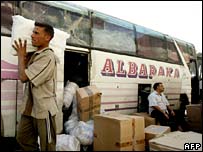 An estimated 1,000 people a day are returning across Iraq’s borders having previously moving abroad to escape the violence, Iraqi authorities say.
…
The UN’s refugee agency, the UNHCR, estimates about 45,000 Iraqis returned from Syria in October – the first month of the school year.

One factor in their return is likely to be a sharp and sustained drop in all kinds of violence, particularly in parts of the capital Baghdad, over past months following a US-Iraqi military “surge”.

THE situation in Iraq has im proved so rapidly that Democrats now shun the topic as thoroughly as they shun our troops when the cameras aren’t around.

Meanwhile, at the box office…