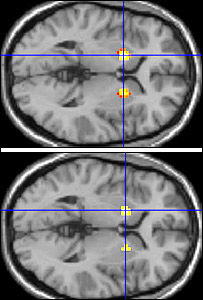 Scans reveal that being paid more than a co-worker stimulates the “reward centre” in the male brain.

Traditional economic theory assumes the only important factor is the absolute size of the reward.

But researchers in the journal Science have shown the relative size of one’s earnings play a major role.

If I were a waging type, I’d bet you that if they scanned my brain the findings would be similar.

I’ll be posting the Carnival shortly. This is one busy morning!