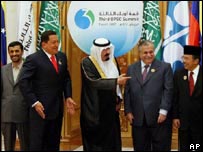 First it was the King of Spain at the Latin American Summit in Chile, now it’s King Abdullah of Saudi Arabia at the OPEC Summit telling Hugo to put a sock on it:

Venezuela’s firebrand President Hugo Chavez appears to have earned for the second time in a week a rebuke from a king, with Saudi Arabia’s King Abdullah implying he shouldn’t seek to use the oil cartel OPEC as a political weapon.

Mr. Chavez also warned the United States that oil prices would further surge if the U.S. contemplates an attack against his country or Iran.

Exactly a week after Mr. Chavez was told to “shut up” by the King of Spain, Saudi Arabia’s King Abdullah said the 13-member Organization of Petroleum Exporting Countries cartel — Ecuador rejoined the group this weekend — shouldn’t be used as a tool for conflict.

His remarks came in a speech minutes after Mr. Chavez told fellow leaders of OPEC Saturday that it must echo its values at the time of its creation and “assert itself as an active political agent.”

The summit saw differences about the future direction of the exporters’ group.

President Chavez and his Ecuadorean counterpart, Rafael Correa, whose country rejoined Opec at the summit, had both pleaded for a more political agenda for the group, but ran into opposition from US ally Saudi Arabia.

King Abdullah, the head of state of the host nation, Saudi Arabia said: “Those who want Opec to take advantage of its position are forgetting that Opec has always acted moderately and wisely.

The final declaration stressed the importance of world peace for the stability of oil prices.

A division had also emerged during the summit between Saudi Arabia and Iran.

Iranian officials wanted the final statement to express concern about the weakness of the dollar.

In a post-summit news conference, Iranian President Mahmoud Ahmadinejad said that all Opec countries showed interest in converting their cash reserves into other currencies.

But Saudi officials were against including any such remarks in the declaration. One is reported to have warned that it could add to the pressure on the dollar.

I would appreciate if any of my readers could translate “Por que no te callas?” into Arabic.