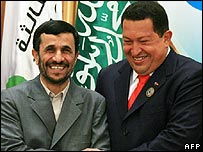 Via Memeorandum, Hugo’s back in Tehran visiting Ahmadinejad and discussing their scheme:

During the gathering, the two firebrand leaders echoed one another, blaming President Bush’s policies for the decline of the dollar and its negative effect on other countries, and challenging Saudi Arabia’s reluctance to mention weak dollar concerns in the summit’s final declaration.

Ahmadinejad claimed OPEC’s member countries want to convert their cash reserves into a currency other than the depreciating U.S. dollar, which he called a “worthless piece of paper.”

Chavez said the dollar was in free-fall and that its “empire” must end, and proposed trading oil in a basket of currencies excluding the dollar.

But the two were unable to generate support from enough in the 13-member cartel — many of whom, including Saudi Arabia, are staunch U.S. allies.

You have to admit, that “basket of currencies” bit is just the sort of thing that any currency and commodities trader simply loves to hear.

As I posted on February 20, 2006 (you might have to go here and scroll down for the link), Al-Jazeera reported on February 2006 that Iran and Venezuela had joined forces to undermine the U.S. dollar.

The latest kerfuffle at the OPEC meeting was only the latest chapter in that story, now that Hugo’s brought his Ecuatorian friend Correa back into OPEC. Expect lots more on this scheme.