As I write this I received an email from one of my contacts telling me the contact’s son was beaten by the police during a demonstration.

“Chavez has won the backing of the poor majority with massive social spending that has expanded health and education programs. He has also cultivated support by openly confronting the United States…”

This is a dangerous “truth”. Chavez has not engaged in structural health and education programs. He has spent billions of dollars in massive handouts, not to be confused with plans to attack the structural roots of poverty, illness and ignorance. He distributes fish but does not teach the people to fish. As a result poor Venezuelans are more dependent than ever on the paternalistic, populist and vindictive leader. The entire health, educational and commerce infrastructure has been decimated due to incompetence and corruption. The state of the most major hospitals is deplorable and thousands of patients are flown every year to be operated in Venezuelan funded hospitals in Cuba. Chavez’ support domestically has not been increased by his attacks on the U.S. In fact, most Venezuelans reject those attacks, as shown by all credible polls.

Chavez is doing the old “Blame the CIA” game to distract from the missing electoral observers:
I posted about the blame game this morning; in the same article, Simon Romero in the NYT points out that no electoral observers are invited to the referendum.

Both Mr. Chavez, a self-described socialist who has won elections by wide margins, and his critics say opinion polls show they will prevail, suggesting a highly contentious outcome. But departing from its practice in last year’s presidential election, Venezuela did not invite electoral observers from the Organization of American States and the European Union, opening the government to claims of fraud if he wins.

Violence has already marred the weeks preceding the vote. Two students involved in anti-government protests claimed they had been kidnapped and tortured this week by masked men in Barquisimeto, an interior city. And in Valencia, another city, a supporter of Mr. Chavez was shot dead this week in an exchange of gunfire at a protest site.

The New York Times insists that the regime is still some sort of a legitimate democracy. (Healthy democracies don’t generally hold elections to give one person abolute power.) However, the Times does at least recognize that Chavez is having some problems controlling the momentum against his referendum on absolute power.

Additionally, the Chavista propaganda wants to portray him as the only hope for the FARC hostages: 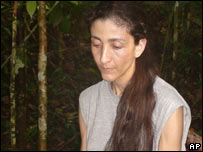 As readers of this blog know, Ingrid Betancourt is the Colombian-French politican that was kidnapped in 2002. The French government (which under de Villepin had sent a plane to the jungle searching for her) has been pressuring Colombia’s Uribe to negotiate with the FARC for her release. Uribe agreed but after it became evident that Chavez was in cohoots with the FARC, Chavez was fired.

Mr Uribe may reckon that a few insults are a price worth paying for ending a venture that seemed certain to provide political gains for Mr Chávez and the FARC but looked unlikely to free all the hostages—if any.

Now A colombo-americana’s perspective has a post on the latest video released of FARC hostage Ingrid Betancourt:

Proof of FARC captives’ survival
The Venezuelan media opine, and –surprise, surprise– the plot thickens. (Video included.) “Información de inteligencia indica que el destinatario de estas pruebas era Hugo Chávez y que iba a recibir la encomienda antes del domingo.” (“Intelligence information indicates that the proof of life were to be given to Hugo Chávez, and that he was to receive them prior to Sunday’s vote.” My translation.) From the Venezuelan daily El Nacional, Betancourt’s mother Yolando Pulecio says the proof was to be delivered to Colombian senator Piedad Córdoba.

While The Economist says that

The referendum may be decided by how many Venezuelans bother to vote. Those in the opposition who called for abstention in past elections (claiming that the electoral authority was not impartial) have this time called on their supporters to vote, whereas in the chavista camp, there are signs of apathy. How widespread this proves to be may determine whether or not Venezuela remains a democracy.

I am very pessimistic and share A Second Hand Conjecture opinion that ” have zero confidence that the referendum will result in anything other than what Chavez wants (i.e. dictatorial control).” Gustavo Coronel, writing at NRO states that

the Chavez government has already printed, at significant expense, some eight million copies of the “new” constitution, one that has not yet been approved and could well be rejected.

Citizen Feathers has An utterly grim view of the future of Venezuela, too.

Reminder:
Dr. Luis Fleischman will be my guest at 6PM Eastern next Sunday, December 2, the day of the referendum, to talk about the day’s events.
Join us!