Chavez is deeply in debt to the Chinese, having borrowed $4 billion just this week. In exchange, he’s saying that Venezuela will double its exports of oil to China,

Mr. Chavez announced that China would see more fuel oil shipped from Venezuela, the largest oil producer in the South America. The export will keep rising until 2010 or 2011, reaching 1 million barrels per day.

Minister of Energy and Petroleum and President of Petroleos de Venezuela Rafael Ramirez claims that PDVSA will be producing 5.8 million barrels per day in 2012. Gustavo Coronel knows this is nonsense.

Just last year Venezuela was buying oil from Russia in order to avoid defaulting on deliveries to clients. 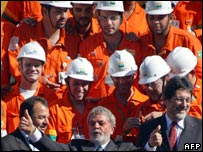 That said, Petroleum World, the BBC and the IHT report that an Offshore oil discovery could make Brazil major petroleum exporter

A huge offshore oil discovery could raise Brazil’s petroleum reserves by a whopping 40 percent and boost this country into the ranks of the world’s major exporters, officials said.

The government-run oil company Petroleo Brasileiro SA, or Petrobras, said the new “ultra-deep” Tupi field could hold as much as 8 billion barrels of recoverable light crude, sending Petrobras shares soaring and prompting predictions that Brazil could join the world’s “top 10” oil producers.
…
“Brazil’s reserves will lie somewhere between those of Nigeria and those of Venezuela,” Gabrielli said at a news conference.

The senior minister in charge of the cabinet, Dilma Rousseff, said if the deposits turned out to be as significant as first thought, it would place Brazil in the same league as Venezuela and countries in the Arab world.

Last year there was another large discovery in the Gulf of Mexico.

Clearly, the development and extraction of the oil fields is still years away, and also, there’s a bigger question: Is the oil recoverable?

That is a good question. Brazil claims that

The state-controlled company says the results show high productivity for gas and light oil – the best quality oil – which is more valuable and cheaper to refine.

Getting that oil out of the Earth’s crust is a formidable challenge, but most of Brazil’s oil lies off its Atlantic coast, and Petrobras has become a global leader in ultradeep offshore oil extraction.

I continue to be optimistic about Brazil.

When it comes to Venezuela, I have mentioned previously that the Venezuelan economy collapsed after the oil boom of the 1970s. This can happen again.

UPDATE
Others blogging on this:
Bad Debt
Gateway Pundit
Gustavo Coronel
Memeorandum
Protein Wisdom
Venezuela News and Views
Welcome, Weekly Standard readers, and please visit often. While you’re here, you might want to visit the Carnival of Latin America and the Caribbean.