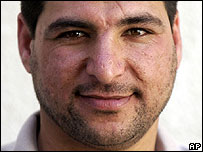 Powerline: The AP Reports on Itself

Bilal Hussein, an Iraqi stringer who has taken many photographs for the Associated Press, some of which are in evident collaboration with Iraqi terrorists… has been held for 19 months in Iraq after being captured in the company of two terrorists. Now, the AP reports that new evidence has emerged against Hussein, on the basis of which a criminal case is likely to be pursued against him.

AP is suffering from its chronic Associated Press Deficit Disorder, claiming that this is a “sham of due process.”

But it’s not a sham.

As you can see at the Powerline post, there are very strong indications that Hussein had to have been collaborating with terrorists. According to the BBC article (click on Hussein’s photo above), he was “sheltering strangers” at the time of his capture.

Actually, quite a bit is known about Bilal Hussein. Michelle Malkin presents a useful summary, with Hussein’s “convenient” photos, and John Hinderaker at Powerline neatly asks, “How stupid does the Associated Press think we are?” Bob Owens provides further information about the legal process and AP grandstanding.

Jawa Report was involved in the capture of Hussein:

He had been sitting in Abu Ghraib for a month, and nobody realized that he was the AP photog who had snapped dozens of staged photos with al Qaeda fighters. The reader was in Abu Ghraib as an investigator working on an unrelated case when he saw Bilal Hussein and recognized him from the extensive coverage we had on The Jawa Report.

He reported it up the chain of command and within days Bilal Hussein was transferred to a different facility, NCIS got involved, and eventually a criminal investigation opened on him.

So, the blogosphere helped bring to light the outrages that the MSM considers standard operating procedure. Helping produce and disseminate terrorist propaganda is just showing “both sides of the story” to the MSM.

They call it journalistic ethics, we call it treason.

And if it weren’t for the blogs, it would go uncovered.