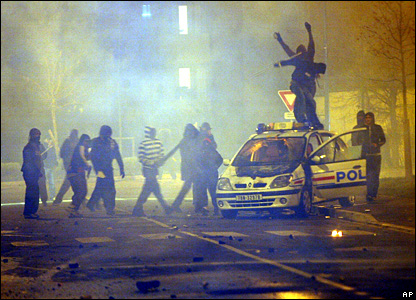 Reuters, AP and the BBC:

Nearly 80 French police officers have been injured, six seriously, during a second night of riots by youths in the suburbs of Paris, police unions say.
The police say some officers suffered bullet wounds, while others were hurt by stones, fireworks and petrol bombs thrown at them in Villiers-le-Bel.

The youths said they were avenging the two teenagers killed when their motorcycle hit a police car on Sunday.

A senior union official said the riots had been more intense than in 2005.

The 2005 unrest, sparked by the accidental deaths of two youths, spread from a nearby suburb of Paris to other cities and continued for three weeks, during which more than 10,000 cars were set ablaze and 300 buildings firebombed.

The second consecutive night of rioting began early in the evening in Villiers-le-Bel, the northern suburb that saw most of the violence on Sunday.

Police fired tear gas and rubber bullets to keep at bay gangs of youths who were attacking them with stones, fireworks and petrol bombs.

More than 70 vehicles and buildings, including the municipal library, two schools and several shops, were set on fire.
…
Mr Ribeiro said police were facing a situation that was “far worse than that of 2005”, which began in the nearby suburb of Clichy-sous-Bois.

Police were shot at and are facing “genuine urban guerillas with conventional weapons and hunting weapons,” Ribeiro said.

This brings the total to a hundred and three policemen and firemen injured since Sunday.

In other French news, a huge security breach at the Pantheon gets the clock repaired.