“Turkey obviously feels they are getting poked in the eye over something that happened a century ago, and maybe this isn’t a good time to be doing that,” said Representative Allen Boyd, a Florida Democrat who dropped his sponsorship of the resolution Monday night.

Mind you, Congress has waited decades for this gesture over the Armenian Genocide; the Ottoman Empire committed genocide nearly a century ago, for decades the Turkish government has spent millions of dollars trying to obscure that fact, and Nancy Pelosi and the Dems in Congress wait until now to bring up a resolution.

Where was Nancy when Bill Clinton also worked to block an Armenian genocide resolution from passing the House? (h/t Sister Toldjah) She’s been in Congress since 1987. Why wait 20 years?

Where’s Nancy when her friend Assad wreaks havoc in Lebanon – now, not a hundred years ago?

But back to the genocide resolution:

I will grant that the killings of many Armenians was particularly heinous and worthy of all kinds of condemnation, but calling it genocide in the US Congress is a foolish attempt to make Nancy and some others feel good. She claims we must do this now before the last survivors die, but the damage done to our operations in the entire region will be huge. The loss of Turkey as a transport hub alone would force us to use more dangerous paths to get 70% of our supplies to Iraq, and that would certainly cause more US deaths.

Second, the business of Congress isn’t to make sweeping historical indictments, regardless of whether they have their information correct or not. This Congress hasn’t even produced its first funding bill for FY2008, even though we are now at Day 17 of the calendar. Instead of issuing resolutions about the real or imagined crimes of a government from 90 years ago, it should be focusing on meeting its Constitutional obligations now. It’s not the timing of the bill that’s objectionable as much as it is the waste of time it represents for a Congress that has much more pressing business on its agenda.

If Nancy Pelosi and Tom Lantos want to take down U.S. policy in Iraq to tag George Bush with the failure, they should have the courage to walk through the front door to do it. Bringing the genocide resolution to the House floor this week would put a terrible event of Armenia’s past in the service of America’s bitter partisanship today. It is mischievous at best, catastrophic at worst, and should be tabled.

Yet another example of Madame as a ‘Brilliant Political Tactician’.

In the real world, however, the present-day Turks are doing some muscle-flexing of their own. 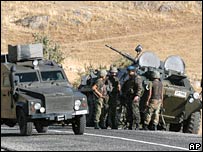 It goes without saying that we would have had more influence on the situation in Turkey had Nancy Pelosi and the Democrats in Congress made themselves the arbiter of the Armenian genocide of 1915. If the troops cross the border, we can thank Pelosi and her colleagues for reducing our ability to avoid a shooting war that could cost thousands of lives here and now.