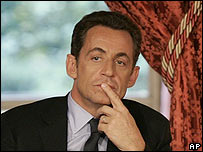 Sarkozy walks out of TV interview: Sarko wasn’t going to talk about his divorce, and he didn’t:

“If I had something to say about Cecilia, I would not do so here,” he said before cutting off further questions.

No Pasaran has the link to 60 Minutes

So, to all our American men, who have been cowed by the unisex armies of overbearing loud-mouthed gossips, I say it’s high time you throw off the shackles of politically-correct indulgence and join the Sarkozy revolution. You too can be real men again, and all the real women will love you for it. Catty gossip has no place in the public discourse, and simply standing your ground and saying so, in no way makes you a “Male Chauvinist Pig,” or even a borderline “sexist.” It simply makes you a self-respecting gentleman of the highest order.

Record numbers of Britons are travelling abroad for medical treatment to escape the NHS – with 70,000 patients expected to fly out this year.

And by the end of the decade 200,000 “health tourists” will fly as far as Malaysa and South Africa for major surgery to avoid long waiting lists and the rising threat of superbugs, according to a new report.

The first survey of Britons opting for treatment overseas shows that fears of hospital infections and frustration of often waiting months for operations are fuelling the increasing trend.

Meanwhile at the Times of London, Quack Michael Moore has mad view of the NHS.

I expect Michael Moore will be rewarded with an Oscar and a Nobel Peace Prize for his efforts.