U.S. combat troop deaths and other violence in Iraq are down significantly in some of the most dangerous places of insurgent activity, including Al Anbar province, military officials in Washington and Baghdad said Wednesday.

How low, you ask?

Maybe most significant was that last week there was not a single military casualty – Iraqi or U.S. – in Anbar, said Maj. Gen. Richard Sherlock, a Joint Chiefs spokesman. It is apparently the first time since March 2003 that could be said.

As you may all recall, Anbar province used to be al-Qaeda’s capital in Iraq.

Osama laments that “the darkness has become pitch black.” That’s him looking into his soul.

Things must be boring for reporters in Iraq, indeed.

Update:
In today’s blogger’s call, I had the opportunity of asking Senator McCain if he could comment on the news. His reply was,

I hope Harry Reid and the media get to hear about it.

This success is directly related to the surge – the Sunni sheiks joined in against al-Qaeda, and now the Shia are doing the same thing….
Overall, it’s a great success story I look forward to seeing it reported on CNN & other unbiased outlets.

You can read more about the Iraq report here.

In tonight’s podcast, Siggy and Gates of Vienna join us to talk about the CounterJihad summit.

NEW YORK (Reuters) – The widow of slain Wall Street Journal reporter Daniel Pearl has dropped a lawsuit against al Qaeda, other radical groups and Pakistan-based Habib Bank Ltd over the abduction, torture and murder of her husband, court records show.

Lawyers on behalf of Mariane Pearl filed the lawsuit in July which sought unspecified damages against “those terrorists, terrorist organizations and the supporting charitable and banking organizations for the senseless kidnapping, torture and murder of Daniel Pearl.”

A notice of voluntary dismissal was filed late on Tuesday in federal court in Manhattan that stated Pearl had decided to dismiss the case.

“The withdrawal was done for personal reasons that had nothing to do with the merits of the lawsuit,” a spokesperson for Pearl’s lawyers Motley Rice told Reuters.

Now that Hugo got his man in Ecuador, and keeping in mind that Venezuela is a major point of transit for drugs smuggled from South America to the United States and Europe, Correa’s coming through: 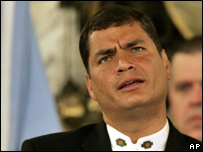 Ecuador wants military base in Miami

Ecuador’s leftist President Rafael Correa said Washington must let him open a military base in Miami if the United States wants to keep using an air base on Ecuador’s Pacific coast.

Correa has refused to renew Washington’s lease on the Manta air base, set to expire in 2009. U.S. officials say it is vital for counter-narcotics surveillance operations on Pacific drug-running routes.

“We’ll renew the base on one condition: that they let us put a base in Miami — an Ecuadorean base,” Correa said in an interview during a trip to Italy.

Interesting how he’s saying it in Italy, isn’t it?

The U.S. embassy to Ecuador says on its Web site that anti-narcotics flights from Manta gathered information behind more than 60 percent of illegal drug seizures on the high seas of the Eastern Pacific last year.

It offers a fact-sheet on the base at: http://ecuador.usembassy.gov/topics_of_interest/manta-fol.html

Correa’s learned his soundbites from Hugo:

Correa, a popular leftist economist, had promised to cut off his arm before extending the lease that ends in 2009 and has called U.S. President George W. Bush a “dimwit”.

But Correa, an ally of Venezuelan President Hugo Chavez, told Reuters he believed relations with the United States were “excellent” despite the base closing.

You would think that by now Chavez and Correa could have paid someone to write them a new script.

Meanwhile in Caracas, the police continue to use force against protestors: 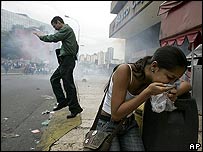 Thousands of students have clashed with police in the Venezuelan capital, Caracas, during a protest against proposed constitutional changes.

Police fired tear gas at students angry at plans to let President Hugo Chavez stand for indefinite re-election as bottles and stones were thrown.
…
Among the students’ concerns about the erosion of civil liberties is the fear that the authorities will be allowed to detain citizens without charge during a state of emergency.

Mr Chavez has dismissed criticism of the constitutional changes saying they are needed to accelerate Venezuela’s transition to socialism.

It was Another shameful day in Venezuela’s democracy

To make matters even worse, the pro-Chavez groups blocking the way included a couple of Deputies of the National Assembly, demonstrating that democracy is not alive and well in Venezuela. As the representatives of the students went into the Capitol building, only the pro-Chavez media was allowed in and even more remarkably a group of pro-Chavez “students” who had nothing to do with the march were also allowed in. Deputy Calixto Ortega won the day in terms of shame, when he said he did not understand why these students required “special” treatment, since the reform has been discussed extensively (!!!) and the students were getting “too much coverage” from the press. I guess the right to express yourself has now become a “special right” in Venezuela.

The news today was the first dissident student march against the ill-called constitutional reform of Chavez. For a first effort it was impressive, and if chavismo thought that they had it made, they must be pondering new strategies tonight. The fact of the day is that the blockade put to the march by chavismo, comprised of Metropolitan Police and the usual red-shirted hordes failed: the students broke through and had to be received by the National Assembly.

Before relating the details of the day it is important to delve on this point: the students threw away their fears, and confronted chavismo in the streets. But also it is important to note that the chavista hordes were less numerous than usual and certainly not numerous enough that even as they were protected by the police, they could not block the passage to the student march. I do not know which is the most important fact, that chavismo is losing its touch or that the opposition is waking up bravely.
…
At any rate, the day is very important for two things:

1) visibly the opposition to the constitutional change is much bigger and determined than what anyone was thinking, including chavismo.

2) the way promises were broken, the way the army and the police acted, illustrate clearly that we are already under a repressive regime and that the objective of the constitutional changes are simply to make legal all that is already taking place.

Here’s the Univision report (in Spanish):

The transition to communism is going to roll right along as Chavez consolidates power. That will continue for as long as oil revenuew hold

Venezuela’s finances may quickly collapse if international oil prices stabilize, as revenues of state-owned PDVSA are falling while its costs are on the rise, according to the head of Harvard’s Center for International Development.

“You don’t need to wait for lower oil prices to see Venezuela crash. A stable oil price will do it, you just have to work yourself for 12 months,” professor Ricardo Hausmann told Reuters in an interview on the sidelines of a seminar organized by Deutsche Bank.

Hausmann, who served as planning minister for Venezuela between 1992 and 1993, argued that while PDVSA’s oil production declines, internal oil consumption is increasing rapidly.

But gasoline prices in Venezuela are subsidized by the government of President Hugo Chavez, who allows Venezuelans to fill up the tank of their cars for less than $2. Moreover, the Venezuelan currency is fixed at an official rate of 2,150 to the dollar, well below the parallel market level of 5,800 per greenback.

“So if you are substituting exports for domestic sales, that has a huge impact on PDVSA,” the professor said, adding that the production costs of the Venezuelan oil industry is also rising fast.

Early this month, Venezuelans formed long lines to buy gasoline in a major provincial city after outages at a refinery prompted rare worries of supply shortages in the country.

The concert was cancelled, too.

Update: A Colombo-americana’s perspective has the timetable.

Last night I was sitting in the family room reading St. Augustine for the class I’m auditing and enjoying a glass of wine, nearly dozing off (Augustine’s not quite the kind of reading I find exciting), when the phone rang.

It was the folks from the Fairleigh Dickinson University public opinion research center.

I’ve been eligible to vote for decades and this is the very first time any of the many surveys has called. I perked up and, seeing a blog post in the making, answered the many questions the lady asked.

First of all, it’s amazing that people actually answer. The survey comprised a few dozen questions and took close to an hour. I really was looking for an excuse to not read St. Auggie.

Then there were the questions: everything from Iraq and foreign policy, to Hillary and the Democrats, President Bush’s approval, New Jersey politics and tolls, and stem cell research. No stone was left unturned.

The questions were asked by a nice lady, not by a machine. A couple of years ago I got an automated “survey” and hung up immediately, not bothering to find out who had the brilliant idea to want my opinion without bothering with human courtesy and contact.

At one point the conversation went like,
“Is progress being made in Iraq?”
I answered, “Very definitely, yes.”
“It is?”
“Oh, yes.”
“Are you sure?”
“Most definitely. I’ve been talking to people who are actually in Iraq right now.”

The Beeb didn’t take long in declaring them innocent: Their report started with “A mistrial has been declared in the case against an innocent Muslim charity…”

I’ll add a link to the video report if the Beeb posts it.

City Journal consistently publishes some of the most interesting articles to be found on the internet. This morning I was reading From the H-Bomb to the Human Bomb by Andre Glucksmann:

What threatens Iraqi society is not Vietnamization but Somalization. Recall Operation Restore Hope, in which an international force, led by Americans, disembarked in Mogadishu in 1993, seeking to ensure the survival of a population that was starving and being massacred by rival clans. After losing 19 in a horrific trap, the GIs left. The rest is well known. An angry President Clinton swore “never again,” and a year later refused to intervene in Rwanda, where 5,000 blue helmets would have been enough to interrupt the genocide that wiped out as many as 1 million Tutsi in three months.

The Somalian model has spread across the planet, from the Congo to chaotic East Timor to Afghanistan, where the Taliban have violently resurfaced, to Iraq. Populations are taken hostage, terrorized, and sacrificed, the spoils of wars by local gangsters. Under various pretexts—religion, ethnicity, makeshift racist or nationalist ideology—commandos contend for power at the point of AK-47s. They fight against unarmed populations; most of their victims are women and children. Terrorism is not the prerogative of Islamists alone: the targeting of civilians has been used by a regular army and by militias under the command of the Kremlin in Chechnya, where the capital city of Grozny was razed to the ground. Where the killers appeal to the Koran, it is still primarily Muslim passersby who suffer. Algeria, Somalia, and Darfur (at least 200,000 dead and millions of refugees in just a few years, with the Sudanese government, protected by China and Russia, acting with impunity) are live laboratories of the abomination of abominations: war against civilians.

This is a must-read, and two paragraphs don’t do it justice; as Glenn says, read the whole thing.