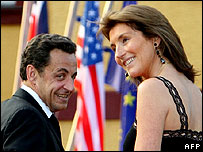 Maverick French President Nicolas Sarkozy and his beautiful wife Cecilia are doing a most American thing: something so American the Americans themselves haven’t caught up yet.

They are divorcing while he is in office.

Rather than remain in a marriage of convenience for the sake of Appereances, the way Bill and Hillary, and Mitterand, and Chirac, and so many others in power have, when their marriage ended, the Sarkos are ending it “by mutual consent.”

Sarko has a reputation as a ladies’ man, and Cecilia ran off with her boyfriend two years ago. For a while there they did the French thing and got back together. Now they are divorcing.

The French are indignant that the Sarkos are being honest with themselves and with the public:

Noël Mamère, France’s other bushy mustached American hating globophobe (who spends his time arranging illegal marriages for criminals), declares that “It’s time to close the book on the Americanisation of French public life”.