SPECIAL PODCAST TONIGHT
Is Iran a proxy for Russia? 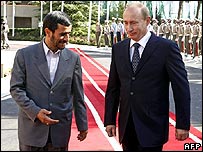 Putin finally made it to Tehran today after some hesitation due to an assasination threat.

The official word is

“Of course I am going to Iran,” he said after talks with German Chancellor Angela Merkel. “If I always listened to all the various threats and the recommendations of the special services I would never leave home.”

The remark played into the carefully crafted image of a fearless leader that Putin has cultivated, and also appeared aimed at emphasizing that he is in control – not under undue influence from security officials – as he maneuvers to maintain influence after his presidential term ends next year.

While Russia’s fearless leader (who is the first Russian leader to visit Iran since Stalin) and the Iranian spokesman want to put lipstick on that pig of a visit, it sounds to me like the intelligence services from both countries do not mutually trust each other well enough to have kept the purported threat from becoming public. The source for the news appears to have come from Putin’s own staff:

It’s one thing when threats like that are revealed in open societies. It’s another thing altogether when both countries involved are not.

Of course, Putin’s fearlessness has a lot to do with that nuclear plant (“for peaceful purposes”) Russia’s building the Iranians, and with a heck of a lot of Caspian Sea oil that would allow Putin to tighten a stranglehold on the EU’s fuel supply.

So far, the Iranians aren’t paying Russia the bills on the power plant, but the Iranians still have much to gain,

Iranian media also emphasized the importance of Putin’s trip. “Iran can use the visit to lobby for getting our nuclear dossier out of the U.N. Security Council and Russia can strengthen its opposition to the U.S. through boosting ties with Tehran,” the hard-line newspaper Resalat said in an editorial.

Which brings me to the next story, by Amir Taheri at the NY Post, TEHRAN’S PRICE FOR ‘SOLIDARITY’
MULLAHS SEEK USEFUL MARXIST IDIOTS

ANXIOUS to create what they call “a global progressive front,” Presidents Mahmoud Ahmadinejad of Iran and Hugo Chavez of Venezuela are sponsoring projects to underline “the ideological kinship of the left and revolutionary Islam.”

The theme – hammered in by Ahmadinejad during his recent visit to Venezuela, Nicaragua and Bolivia – inspired a four-day seminar organized by his supporters at Tehran University last week (partly financed by Chavez).

This, of course, is part of the PR campaign against the USA, as was Ahmadinejad’s visit to the three stooges last month. But it’s a lot easier being the host and having the stooges come visit you:

The conference title was “Che Like Chamran,” a play on words designed to emphasize “the common goals” of Marxism and Islamism. It honored Mostafa Chamran on the 26th anniversary of his death, which coincided with the 40th anniversary of the death of the Cuban-Argentine guerrilla icon Che Guevara.

Interestingly, Che and Chamran died at strategic points in their countries’ histories, too:

Chamran was a Khomeinist militant of Iranian origin who became a U.S. citizen in the ’60s before traveling to Lebanon, where he founded the Amal guerrilla group. He entered Iran in 1979 and helped the mullahs seize power. Appointed defense minister by Khomeini in ’81, he died in a car crash a few months later.

The conference had three guests of honor: Mahdi Chamran, a brother of Mostafa and an Ahmadinejad associate, and Che’s daughter Aleida and son Camilo.

Aleida, a pediatrician who lives in Havana, wore the mandatory Khomeinist hijab, while her brother had grown designer stubble to please the hosts. Also attending were an array of aging European and Latin American “Guevaristas” and Lebanese Hezbollah cadres.

Things were going along swimmingly until Aleida Guevara, who must have found time to travel to Tehran after trying to get Argentinian citizenship for her Cuban children, demanded the right to speak.

Not only that, she publicly contradicted the keynote speaker, who claimed that Che was “a truly religious man who believed in God and hated communism and the Soviet Union.”

Demanding the right to respond, Aleida Guevara told the conference that Qassemi’s claim might be based on a bad translation: “My father never mentioned God,” she said as the hall sighed in chagrined disbelief. “He never met God.”

The remarks caused a commotion amid which Aleida and her brother were whisked away, led into a car and driven to their hotel under escort.

But the poop didn’t hit the fan until later in the evening, by the end of which both Aleida and her brother Camilo “had become nonpersons”, in Taheri’s words, and the Iranians had forgetten that Che was a Marxist.

I’m willing to bet Vlad’s not hitting the mosques on this trip, but I am sure there’ll be some discussion regarding that UN Security Council seat.

Related reading: Connecting Dots On The Axis Of Evil

Iran is already active in Syria, but it’s also active much closer to home. Through small starter projects such as the manufacture of tractors and small-arms cooperatives, Iran’s Mahmoud Ahmadinejad has set up joint projects with Venezuela’s Hugo Chavez, who supports Iran’s nuclear program and seeks one of his own.

Last month, Iran’s leader announced a $1 billion investment in Bolivia for projects that could include Iranian mining for Bolivian uranium. Such cooperation may have political rather than economic purposes. The countries seek to disguise their aims just as the higher powers of the axis seek to deceive about theirs. It may not be a threat today, but it’s certain to be a problem on the horizon tomorrow if the axis is not acknowledged.

We’ll continue to keep an eye on these actors.