One more step in the civil jihad:

Muslim extremists destroyed the last two tallest towers in New York.
Maybe the owner of the next tallest building thinks this will keep his tower safe?

In a monumental nod to political correctness, the Empire State Building is to be lit up green in honor of the Muslim holiday Eid. The separation of Islam from terror is officially complete.

Six years ago, Islamic terrorists screamed “Allah is Greatest!” as they slammed fuel-laden jumbo jets into two other New York skyscrapers. Six years ago, New Yorkers were worried about the Green Menace.

Now, for the first time, New York’s remaining famous skyscraper will be aglow in green — the color of Islam — to mark the end of Ramadan, a month of intense Islamic renewal. Officials say it’ll be an annual event, in the same tradition of the yearly skyscraper lighting for Christmas and Hanukkah.

IBD points out how we’re adopting sharia by the inch:

Nothing yet on Buddhists or Hindus. Or whether Jewish and Christian holidays will be celebrated by similar illuminations in Dubai.

We continue to appease ourselves into sharia law.

Not With A Bang, But With A Whimper; Not With Destruction, But With Dhimmitude 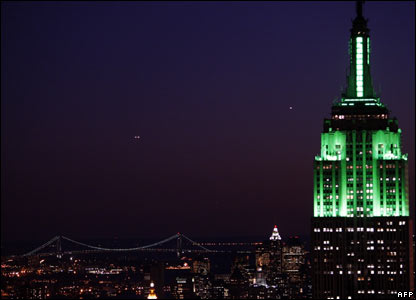