The New Republic (who disgraced itself with the Scott Thomas Beauchamp story) has an excellent article by Alvaro Vargas Llosa, Bolivian Myths: What Do the Bolivian People Really Want:

After talking to Bolivians from all walks of life in areas ranging from the rural outskirts of Santa Cruz, in the east, to Cochabamba, in the highlands, and from the jungles of Chapare to Tiwanaku, the site of an ancient citadel peopled by indigenous Bolivians, I am persuaded that Morales’ government is ruling based on myths. Those myths need to be exposed before other Andean countries where ethnic and social divisions are also abrasive follow suit.

As they say, read the whole thing. 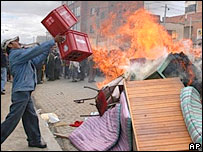 What would Bill Cosby say?