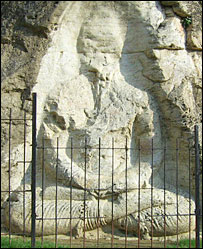 Suspected pro-Taleban militants have tried to blow up an ancient carving of Buddha in north-west Pakistan.
…
The area has seen a rise in attacks on “un-Islamic” targets in recent months.

The Buddhas at Bamiyan, Afghanistan, were destroyed by the Taliban in March 2001.