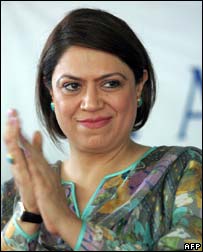 I opened by mentioning Nilofar Bakhtiar, whose France2 interview aired right before the podcast started. Ms Bakhtiar went skydiving in France last April and has a fatwa on her head because she hugged her male skydiving instructor. Following the scandal, she offered to resign but the Pakistani Prime Minister refused her resignation.

During the France2 interview, Ms Bakhtiar calmly discussed that

In February a female provincial minister was shot dead by a man who, police said, did not think women should be in politics.

They all live under 24-hr armed custody. 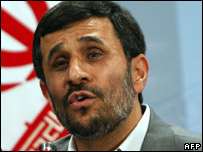 The latest on ‘Jad is that he won’t be visiting Ground Zero but Columbia University said it does not plan to call off his upcoming speech. As Roger (who was not in the podcast) asks,

I have a question for the Columbia crowd, since Holocaust deniers are welcome, would you allow a speaker in favor of a return to black slavery?

Certainly Columbia can’t be hosting ‘Jad for his scholarship or for his legitimacy as a world leader.

‘Jad update: The New York Times editorial board will host Ahmadinejad for lunch at the Four Seasons hotel on Monday.

Back to the podcast: From there we talked about how Lars Vilks‘s artwork earned him a fatwa, and a $100,000 bounty on his head, with an additional $50,000 if he’s decapitated. Gates of Vienna has been following the story from the start, and the latest is that the chairman the Muslim Association of Sweden wants “a clear law to protect the Muslim minority in this country.”

Siggy refers to Wednesday’s as Podcast As Slugfest, because we got into the subject of the DREAM act. I am totally against providing in-state tuition breaks to illegal aliens if the dependents of the taxpayers of that state can not get the same in-state (lower) fees, but Siggy is equally adamant that we should educate them at tax payer expense – even when the taxpayers don’t get the same break.

Yesterday I heard from the friend that I mentioned in my post. She was hoppin’ mad, because, aside from being the taxpayer I mentioned in the podcast, the DREAM act
1. denies in-state tuition to legal aliens with student visas
and
2. repeals a 1966 Federal law that requires that states offer all US citizens in-state tuition if it’s to provide it to illegals.

She was ready for a slugfest, but turned down my offer to come on the podcast to discuss it.

If this podcast was a slugest, I’d say it’s a couth, gentle, slugfest, but you must listen and tell me, was it a slugfest?