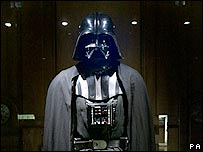 A bunch of Harvard/Mc Master/Fla. State scientists figured a nifty way to go on a junket to Tanzania: Go looking for “one of the last true hunter-gatherer cultures”, record the guys saying “Hujambo” (Hello), and then check out who has the most offspring. The deep-voiced guys do, at least in that neck of the woods (savanna?). From there the researchers jumped to a conclusion that every Patrick Stewart fan already knew: Women prefer men with deep voices.

In case you didn’t know already, yes, I certainly do.

“In previous studies, they have shown that women find deeper male voices to be more attractive, judging them to be more dominant, older, healthier and more masculine sounding.”

Spend thousands of dollars, travel across the world, bother the natives, and reach that conclusion. Sweet.

I thought everybody knew that men with deeper voices are more masculine sounding.

But then, you know what they say about men with deep voices.

The researchers would have saved the airfare to Africa if they had called The Anchoress and me. We would have told them that

baritones won out over tenors.

One particular baritone comes to mind.

On the downside, the researchers also claim that

On the other hand, when it comes to the podcasts, Siggy‘s on the baritone range.

But in more serious matters, Patrick Stewart’s playing Macbeth in London. I think he looks better without a mustache, but I’m hoping the production moves to Broadway. Patrick Stewart is a force of nature on stage.

And for a bald guy in his sixties, he’s hot. Very.