I didn’t do a round-up on Bin Laden‘s latest “appearance” (which apparently was scripted by 28-year-old Adam Gadahn – h/t Jeremayakovka) for this blog because I was doing one for Pajamas Media. All I can add is that OBL’s looking like a Muppet Show reject.

Doug Ross, however, has done the illustrated version of OBL, while Gateway Pundit did a side-by-side and noticed that,

OBL was more animated in 2004- more movements.
Today he looked a little stiff.

On to a crock of a different kind, 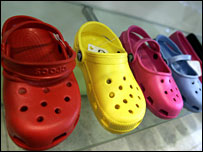 Bjorn Lofqvist, the spokesman for Blekinge Hospital, said that staff wearing Crocs could produce “a cloud of lightning”.

I would say that the Swedes have other medical matters to worry over.