“Fidel” has written another article for Granma, and he damns “the seemingly invincible ticket of Clinton-Obama” for asking for a democratic government in Cuba. However, he heaps praise on Jimmy Carter, that friend of Hugo.

Apart from the usual stuff one expects from the invisible dictator who writes newspaper articles from an undisclosed location, “Castro” also mentions that he and Che used to play golf together and that Che had caddied in his younger days.

Who’d have thun it!

The thing about Hugo Chavez is that he is not crazy. He just acts crazy.

On the foreign-policy front, he endears himself, or seeks to do so, to every tyrant on Earth. He went to Iran and intended to visit North Korea, but there, Venezuela’s National Assembly drew the line. He is abject in his praise of Fidel Castro, and unequivocal in his hatred of American institutions.

It is a pity; but we need to remind ourselves that every now and then democracy simply spits in one’s face. The people who voted in 1933 for Adolf Hitler were driven by that dangerous temptation.

In Latin America, the demagogue has a great natural advantage. The reason for this is that the United States represents, to the angry Latin American voter, the hothouse of hateful institutions. Hugo Chavez is head of a country of 27 million people. They are mostly poor. And with poverty there often comes pain from observing those who do not share in it.

We all know where this is leading them.

Expect it to get worse for a long time.

Six members of a low income family have donated $200,000 to Hillary and other Democrats’ campaigns since 2005, making them the #3 donor family to Hillary’s campaign says the Wall Street Journal: Big Source of Clinton’s Cash Is an Unlikely Address.

But look at this,

The Paws’ political donations closely track donations made by Norman Hsu, a wealthy New York businessman in the apparel industry who once listed the Paw home as his address, according to public records. Mr. Hsu is one of the top fund-raisers for Mrs. Clinton’s presidential campaign. He has hosted or co-hosted some of her most prominent money-raising events.
…
According to public documents, Mr. Hsu once listed his address at the Paw home in Daly City, though it isn’t clear if he ever lived there. He now lives in New York, according to campaign-finance records, on which he also lists a half-dozen apparel companies as his employer. In the campaign-finance forms, Mr. Hsu lists his companies as Next Components, Dilini Management, Because Men’s Clothes and others.
…
Mr. Hsu is also a major fund-raiser for Mrs. Clinton and other Democrats. When Democrats won control of Congress in November, he threw a party at New York City hot spot Buddakan with many prominent party leaders. Press reports said that toward the end of the night, he grabbed the microphone from the deejay and shouted: “If you are supporters of Hillary for President 2008, you can stay. Otherwise, get out.”

Mr. Hsu has pledged to raise $100,000 or more for Mrs. Clinton, earning the title of “HillRaiser” along with a few hundred other top financial backers of her campaign. Earlier this year, he co-hosted a fund-raiser that raised $1 million for Mrs. Clinton at the Beverly Hills, Calif., home of billionaire Ron Burkle. He is listed as a co-host for another Clinton fund-raiser next month in northern California.

The Paw family is just one set of donors whose political donations are similar to Mr. Hsu’s. Several business associates of Mr. Hsu in New York have made donations to the same candidates, on the same dates for similar amounts as Mr. Hsu.

The WSJ says, “No one in the Paw family had ever given a campaign contribution before the 2004 presidential election, according to campaign-finance reports.”

Coincidence? Laundering? Or really judicious budgeting on the part of the Paws?

… and liberals get upset (I underlined the good part):

An aversion to affordable housing?

Redevelopment could slow the African-American exodus, but it’s unclear how it would address the far more challenging work of attracting blacks to the city.

At $8.82 an hour, San Francisco has one of the nation’s highest minimum wages. It offers a tax credit to working families. As of July, uninsured residents under age 65 became eligible for universal health care. Preschool is available free to every child. The city has approved more affordable housing in the past few years than at any other time in its history, Newsom says.

Many blacks here shun buying affordable housing because those homes have “equity restrictions” to keep them affordable, which means they can’t be resold at market rates.

“They see homeownership as a chance to gain assets that will grow. So they’ll go outside the city,” says Ed Donaldson, counseling director for the San Francisco Housing Development Corp.

Shouldn’t this be a cause for celebration – that inner city black families don’t want government-subsidized housing, but prefer to buy their own house and build up equity?

And while you’re at it, every city that has rent-control laws in the USA also has chronic housing shortages.

Yet another politician in a sex scandal, as if 2008 wasn’t going to be tough enough.

That Craig has turned out to be gay after all in and of itself doesn’t bother me from a legislative perspective, because you can be gay and vote in favor of things like the DOMA, just like you can be black and vote against affirmative action, and just like you can be a woman and vote against abortion – unlike the left, who believes that minorities who don’t vote the way “they’re supposed to” are traitors to their very beings. It’s the personal aspect of this that is bothersome – the deception, the lies, the adultery, the criminal nature of what he was arrested for back in June (is that the tip of the iceberg on Craig’s adulterous behavior?). He’s married. He’s broken his vows of marriage. He hasn’t been practicing what he preaches. He’s deceived his constituency. That’s what’s bothersome.

He should resign, not for his behavior in the bathroom, but for his creepy political phoniness.

If there’s a contradiction in my attitude, so be it.

Craig has no excuse either way.

Nicolas Sarkozy announced to the world that “An Iran armed with nuclear weapons is unacceptable,” (link in French), raising the possibility of bombing Iran if needed.

I just did a brief translation for Pajams Media. Go read it.

Curiously, the France2 newscast didn’t spend much time on that part, choosing instead to talk about Turkey. 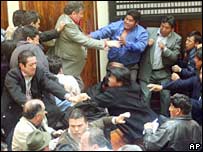 UPDATE
You can listen to today’s podcast here

In today’s Blog Talk Radio podcast, it’s time for Fausta’s Blog Talk Radio monthly roundtable with Dymphna and and Baron Bodissey of Gates of Vienna and Siggy. Today we’ll be discussing the SIOE’s proposed demonstration on September 11 in Brussels.

I don’t expect he’d be welcome with open arms in Pakistan, either.

Note to Opus readers: The Opus strips for August 26 and September 2 have been withheld from publication by a large number of client newspapers across the country, including Opus’s host paper The Washington Post.”

Salon has the strip in question.
Atlas Shrugs, Linda, Q&O, SCSU and Captain Ed have commentary.

How do you spell dhimmitude?

Hillary’s up in Martha’s Vineyard nagging about Katrina and wearing a totally unflattering smock that does nothing for her.

Here’s what I suggest instead:
Thomas Pink 3/4 sleeve shirt in a bold pink stripe, preferrably custom-fitted.

As for the nagging, there’s no cure for that.