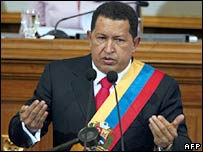 As expected, Venezuela’s Chavez calls for end to term limits, along with more control over banks, international reserves and powers to expropriate private property by decree; that is, the whole enchilada arepa.

An expensive arepa it is to import, considering how sending suitcases full of cash to finance pro-Chavez candidates in Latin America. This week it was Argentina’s turn, for $800,000:

The money could have been intended for the campaign of first lady Cristina Kirchner or for pro-Chavez groups such as D’Elía’s, or may be a kickback to Argentine government officials for a business deal. Either way, if it had been clean, it would have been done by wire transfer.

But let’s keep an eye on the menu.

Of course, Hugo’s serving that arepa with side dishes, in order to keep the visitng useful tools like Barbara Walters, Cindy Sheehan and Sean Penn happy. The side dish de hoy being

The assembly is expected to approve the proposals within several months and they would then be put to a national referendum.

Chavez control 100% of the assembly (all 167 seats), the courts, and the state and municipal governments (except for a few where opposition candidates won posts).

(To those of you who want to convince me that Chavez has been lawfully elected by wide margins consistently since 1998, let’s just say that an audit of the 2004 election showed a 99% chance that there was electoral fraud. Wide margins, of course, do not a democracy make.)

And the platter’s got some garnish too,

President Chavez told the assembly his proposals would only affect 33 articles, about 10% of the constitution.

Then there’s the bread: six-hours-a-day socialism, by which the maximum working day is reduced to six hours. “Now we are headed straight towards socialism,” says Hugo, in a giant leap forward to Mugabe-style prosperity.

Chavez also has a mechanism that will cripple these officeholders even further. Hugo has formed 20,000 “communal councils” that will have the power to distribute funds from the dictator on infrastructure maintenance and social welfare programs. The councils answer to him, and their distribution of money will solidify Chavez’ grip on the nation.

are intended to 1) reinforce Chavez powers and 2) make sure that no one has access to enough power to launch a threatening bid against Chavez in any future election.

With a menu like that, Hugo’s well on his way to being the happiness dictator.

Until then, don’t go wearing a thong.