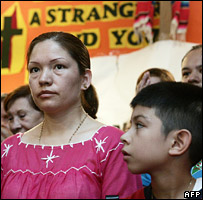 Elvira Arellano was arrested in Los Angeles and was deported to Tijuana, Mexico. Arellano’s been illegally in the USA on and off since 1997, and in 2002 was convicted of working under a false Social Security number – a felony. Whether she made up a Social Security number out of thin air, or she committed identity theft is unclear; Arellano committed a felony all the same. She then defied a court order by hiding at the Adalberto United Methodist Church in Chicago rather than surrender to authorities.

Nowhere in the thousands of words written about this case show any effort from Arellano in the past ten years to
1. learn the language
2. legalize her immigration status under the existing laws
3. accept the US as “her country”, even when she’s lived nearly one third of her life here, gave birth to her son here, and is adamant about staying

“I only have two choices. I either go to my country, Mexico, or stay and keep fighting. I decided to stay and fight.”

4. most importantly, accept that the rule of law applies to everyone including herself.

Her 8yr old son Saul is in the middle of all this. He was born here while his mother purposely violated the laws of this country. This boy has been exploited in innumerable photo-ops. Last November, Saul went to Mexico’s Congress to make a personal appeal for help to stop his mother’s deportation. Now

Apparently Elvira and all of those people who are outraged that “the bad USA is ripping a family apart” have never stopped to consider that it is Elvira herself who chooses to leave her own son behind, rather than remain together as a family and bring him with her to “her country” (her words, not mine), as a responsible parent would do.

Via Blue Crab Boulevard, many immigrants to the USA resent Arrellano’s actions:

Chicago Spanish-language radio host Javier Salas said he felt badly for what happened to Arellano. But in leaving the sanctuary of Adalberto United Methodist Church and heading to Los Angeles, it was only a matter of time before she was arrested.

I know two people who were brought to the US illegally by their parents while they were young children. Both of them are now US citizens, and their families are also here legally.

While it took them years of effort and a lot of paperwork, they did it, and they’re the ones that tell you that the US is their country. Illegal aliens struggling to get away with crimes by insisting that the rules be changed to accommodate them at their whim are not what legal immigration is about. It is, however, what amnesty and comprehensive immigration reform are about (h/t Hot Air).

But fret not. I’m sure we’re going to hear from Elvira soon, again.